Home » Jazz Articles » John Mayall: The Sun Is Shining Down

John Mayall: The Sun Is Shining Down

By Doug Collette
January 29, 2022
Sign in to view read count 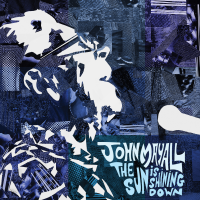 Having announced he will be limiting his touring in the future, John Mayall doesn't seem to have lessened his engagement with recording. On the contrary, for The Sun Is Shining Down, 'The Godfather of British Blues' surrounds himself with a roster of high-profile contributors, all of whom play to their respective strengths and sound inspired collaborating with a genuine musical icon. Equally importantly, this fifth Forty Below Records studio outing (out of some forty overall) radiates a sense of deep personal meaning in many of its ten cuts.

For instance, "Can't Take No More," featuring Marcus King, would seem to speak directly to Mayall's view of the road. As does "I'm As Good As Gone," with a guitar hero of a different sort, Buddy Miller; it's a tribute to both men's awareness of their surroundings that neither's contributions undermine the emotional quotient of the songs. Likewise, in keeping with the versatile skills he's displayed in the past, Tom Petty's long-time Heartbreaker collaborator Mike Campbell plays "Chills and Thrills" with the economy that's always distinguished his playing. In doing so, he upholds the tradition of great Mayall guitar hires including Mick Taylor and the late Peter Green, both of whom went on to distinguished careers, in the The Rolling Stones and founding Fleetwood Mac, respectively.

On this fortieth-odd studio release of his career, Mayall also seems to purposefully hearken to previous touchpoints in his discography. In doing so, however, such occurrences sound perfectly fresh: the ghostly air violinist Scarlet Rivera (of Bob Dylan's Rolling Thunder Revue) adds to "Deep Blue Sea" deliberately evokes memories of Mayall's unconventional drummer-less bands with a cull from USA Union (Polydor, 1970). Meanwhile, Hawaiian ukulele star Jake Shimabukuro plays in total service of the song on "One Special Lady" as does Melvin Taylor during "Driving Wheel" and "Hungry and Ready."

On the latter, the modern day Chicago blues mainstay finds himself in the company of a vigorous horn section that recalls the eighty-eight year-old Mayall's LP Crusade (Polydor, 1967). Saxophonist Ron Dziubla, trumpeter Mark Pender and trombonist 'LaBamba' Richard A. Rosenberg deserve props for their gusto, but kudos must also go to producer Eric Corne for ascertaining the proper balance in these arrangements, forged in recording at The Doors' guitarist Robbie Krieger's Horse Latitudes studio. Still, such meticulous attention to detail wouldn't matter much without the innate authenticity Mayall brings to the proceedings.

Besides contributing originals, such as the title -song (where his current band mate Carolyn Wonderland shines on guitar), the OBE recipient also continues his discerning selections of outside material. Bobby Rush wrote the aforementioned "I'm Good As Gone," while Southern renaissance musician/songwriter Tinsley Ellis co-wrote "A Quitter Never Wins;" John Mayall's been guilty of churning out albums in the past—and admits as much in his autobiography Blues From Laurel Canyon: My Life As A Bluesman (Blackstone Publishing, 2020)—but there is no sense of the forced or over-familiar here. On the contrary, the music ripples with life.

Ample evidence everyone involved was experiencing a rediscovery of their affinity for the blues, the invigorating effect(s) of interacting with like-minded musicians permeates these forty-three minutes. And the frontman's rhythm section for over a decade is hardly an exception: bassist Greg Rzab and drummer Jay Davenport reliably support the various ensembles without disappearing into anonymity. That approach constitutes following the lead of their bandleader himself, who, besides singing, plays with his customary taste on Hammond B3, piano, Wurlitzer electric piano and harmonica.

Of course, the man has never mistaken himself for a virtuoso over the course of his fifty-plus year professional career. Rather he's utilized his restrained instrumental skills as the means to an end of forging ensembles that conjure their own chemistry. The Sun Is Shining Down is one more example of that dynamic in action and as such, it will no doubt prove to be more durable than its deceptively modest ambitions suggest.

Hungry and Ready; Can't Take No More; I'm As Good As Gone; Got to Find A Better Way; Chills and Thrills; One Special Lady; A Quitter Never Wins; Deep Blue Sea; Driving Wheel; the Sun Is Shining Down.

Title: The Sun Is Shining Down | Year Released: 2022 | Record Label: Forty Below Records