Nat Birchall: The Storyteller: A Musical Tribute To Yusef Lateef 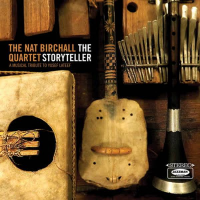 The deification of Yusef Lateef, which began only after his passing in 2013, rests on the first decade of his long recording career, from 1957—1967, when he extended the language of jazz to include elements of Asian and Middle Eastern musics while recording for Savoy, Prestige and Impulse. After a second decade with Atlantic, where he recorded ten stonkingly good soul-jazz albums, Lateef took up with Creed Taylor's CTI and began a sad decline into noodling wallpaper music. This period was documented exhaustively on Lateef's own YAL label.

With hindsight, intimations of Lateef's post-1970s trajectory were apparent as early as 1961, on Eastern Sounds, his breakthrough album, which was originally released on Prestige's easy-listening imprint, Moodsville. While the tunes are attractive and the performances engaging, Lateef's arrangements are on the approximate level of Les Baxter's exotica: briefly diverting but slight.

That said, Lateef made mostly transporting and adventurous music during his early heyday, mapping out a transcultural pathway for later astral-jazz travellers such as Pharoah Sanders and Alice Coltrane. Alongside this, his mid-1950s experiments with modal jazz were acknowledged as important influences by John Coltrane and Miles Davis.

So the centennial of Lateef's birth, which falls in 2020, deserves celebrating, and the Jazzman label has had the inspired idea of asking British reeds player and astral-jazz champion Nat Birchall to mark the event with a tribute album. The result, The Storyteller, is as much Birchall's as it is Lateef's and it is a beauty.

Instead of simply revisiting some of Lateef's greatest moments, Birchall wrote six of the eleven pieces on the album himself. More about these in a moment. Of the remaining five pieces, three were written by Lateef and two others are associated with him. Lateef's "Morning" comes from Jazz Mood (Savoy, 1957), whose cover art is also referenced on The Storyteller (and whose band included Alice Coltrane's brother Ernie Farrow playing the Afghani rabat). Lateef's "Ching Miau" and Alex North's "Theme From Spartacus" are from Eastern Sounds. Masao Yoneyama's "Ringo Oiwake" is from Jazz 'Round The World (Impulse, 1964). And Lateef's "Brother John" was recorded live in Philadelphia in 1964 but not released by Impulse until 1976, on Club Date.

Birchall's own compositions do not follow a blueprint, but are in tune with Lateef's general approach to composition—strong melodies and bass ostinatos and piano vamps and unusual (for jazz) time signatures. In addition, Birchall clearly relished employing some of the many instruments from outwith Western culture that he has collected over the years. See "Personnel" below for details. And yes, the album does sound as delightful and genre-bending as those instruments suggest.

A final thought. It would be appropriate if Atlantic marked Lateef's centennial by making available again the down-on-the-one albums he recorded for the label, all made with R&B producer Joel Dorn. The series cries out for wider recognition.