Mark A. Lomax: The State of Black America 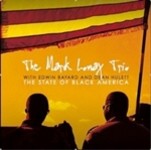 There has not been such an in-your-face title for an album of music in a long, long time. Drummer Mark Lomax has decided that it is necessary and, therefore, goes for the jugular by calling his album The State of Black America. Perhaps the release is timely, with racism seemingly raising its ugly head more frequently since Barak Obama was elected President of the United States in 2008. So, in the mind of the drummer and leader of this trio, it appears to be time to take stock of the issues of Black America—issues that should have been put to bed a long time ago. The question that must be answered immediately is this: how did jazz become part of this political manifesto?

The State of Black America is how the African American Lomax decided that he would respond to the poignancy of racial identity: being an inhabitant of Black America, as opposed to America; and with the unbridled improvisational polyrhythms that drive harmonic and melodic invention, and have become the bubbling cauldron of the jazz idiom. This is his music and, like it or not, derives from the energy and emotion of both the blues and, despite being often condemned by men of the cloth, the spiritual. Sure it is America's music, but it is the invention, the innovation of Black America first. The acute sentiments expressed by Lomax were first expressed by other musicians, from Charles Mingus to Muhal Richard Abrams, over fifty years ago. The fact that Lomax feels that he must express them again is poignant, to say the leas, despite not even beginning to say everything meaningful about this music of Black America. But given all that has passed in the last fifty years of contemporary music, how does Lomax fare?

The drummer's music is as sharp as his perceptions are, and it swings magnificently. The multiplicity of rhythms expressed by Lomax and bassist Dean Hulett on "Stuck in a Rut" are magical and mesmerizing, especially when the bassist breaks away—silencing the comping pianist—to go it alone, before the trio returns to the twisting melody. "The Unknown Self" is more like a mystical journey into the unknown ocean of harmony and rhythm, where both seemingly do battle like a mythical Gilgamesh and Enkidu, and Jacob and the angel. This is somewhat resolved in "The Power of Knowing" and, finally, in the truly mystic-themed, "To Know God is to Know Thyself," both of which are powered by Lomax's fervent belief in the omnipresence of God. The transformation of the searching Lomax is completely resolved in "Blues for Charles," where the chrysalis seemingly becomes the butterfly; but this entire success doesn't come before Hulett and saxophonist Edwin Bayard deliver fine accounts.

This is a courageous suite from Lomax, who apparently finds himself—by the end of it all, and absurd as it might seem—at the expense of eschewing what he calls "the classical traditions of Europe," an experience unsurpassed in Ornette Coleman's Skies of America (Columbia, 1972).