John Surman: The Spaces in Between 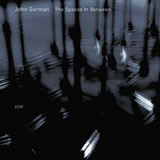 One challenge facing many musicians is the documentation of widespread musical interests. More often than not, artists engage in projects that are heard in performance, perhaps on a radio broadcast, but then never again. Sometimes ongoing projects are documented, but only once, as is the case with British woodwind multi-instrumentalist John Surman's superb Stranger Than Fiction (ECM, 1994)—the only commercial recording featuring his longstanding quartet of pianist John Taylor, bassist Chris Laurence and drummer John Marshall.

Making it good news that Surman's bass with string quartet project, first heard on the sublime Corruscating (ECM, 1999), now has a follow-up, albeit seven years later. The Spaces in Between, featuring Laurence and the Trans4mation string quartet, is a logical evolution that finds the line between detailed composition becoming, at times, blurred in ways that simply weren't possible in the project's earlier days.

The Spaces in Between is an even more egalitarian effort than its predecessor, with its eight-minute title track a solo feature for violinist Rita Manning. It's also a title that's not just appropriate for the piece, where silence plays equal partner to Manning's evocative performance, but for the label, where transparency in the recording process has always afforded every note its full measure

It's also the album's centerpiece, towards which all paths converge and from which many roads follow. "Moonlighter" opens the set, a brooding tone poem where Laurence improvises over the string quartet's languid changes before Surman enters, with the unmistakable mellifluousness of his baritone almost antithetical to its normally gruff tone. Without Laurence it might rest too far in the ethereal, but the bassist provides a gentle pulse that leads the music towards a self-devised nexus where form and freedom meet.

Surman's arrangements for the ensemble also create a sound often larger than its mere six pieces while never losing a chamber group intimacy. The strings act as emphatics around his bass clarinet on "You Never Know," but also become contrapuntal equals as the piece progresses. The strings create a gentle turbulence beneath Laurence and Surman's theme at the start of "Wayfarer's All," but shift towards a more pastoral ambience beneath Surman's lyrical soprano solo.

Two tracks originally written for other projects demonstrate how adaptable and malleable any music can be with the right leader at the helm. The Middle Eastern tone of "Mimosa" is no surprise, a tune written (but never recorded) for Thimar— Surman's 1998 ECM collaboration with bassist Dave Holland and Tunisian oudist Anouar Brahem. The gliding strings, played with nuanced dynamics, feel completely authentic. Surman also revisits the title track to the largely free jazz Where Fortune Smiles (Dawn, 1970), transforming it into a melodic and eminently accessible thing of beauty.

The Spaces in Between is another milestone for Surman, who records all too infrequently but consistently finds new ways to expand musical boundaries each and every time.

Moonlighter; You Never Know; Wayfarers All; Now and Again; Winter Wish; The Spaces in Between; New See!; Mimosa; Hubbub; Where Fortune Smiles; Leaving the Harrow.