Jonathan Kreisberg: The South Of Everywhere

By Glenn Astarita
November 20, 2007
Sign in to view read count 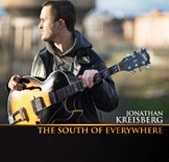 New York-based guitarist Jonathan Kreisberg provides a lesson or two here, on his second date for Mel Bay Records. It's not all about chops or technique. He adds credence to that notion via thoughtful compositions and small ensemble-led arrangements that communicate his penchant for fusing power-packed dynamics with memorable melodies.

Kreisberg is well-equipped in the technical domain. But it's more about quality and substance that underscores this largely exhilarating effort. With everyone's favorite session keyboardist Gary Versace manning the acoustic piano and an ace support system in place, Kreisberg's resonating medium-toned jazz licks form a multi-directional perspective. He blazes forth with lyrically-rich single note flurries, but tones it down in spots, where prismatic voicings come to fruition amid his complex unison choruses with Versace and saxophonist Will Vinson.

The musicians often engage in linear patterns, often designed upon swing and bop. Yet there's a buoyant undertow that supplants the guitarist's compositional realm, also including two shrewdly rearranged standards. At various times, the ensemble will shift the groove aspect into a sprightly Latin motif. And when Kreisberg cranks up the volume control, the band generally segues into thrusting rhythmic metrics and climactic opuses.

On the classic "Stella By Starlight, the ensemble kicks off a simmering spin on an oldie but goodie with harmonious lines amid Kreisberg's mode of attack, which is akin to projectiles rapidly spewing into the cosmos. Contrasts abound during "Elena, which is a low-key ballad that projects comfort and warmth. Kreisberg's already spiraling presence within modern-jazz circles should benefit from a rocketing boost with the advent of this top-flight effort.