Elio Villafranca Quartet: The Source In Between

BY MARCIA HILLMAN
August 9, 2008
Sign in to view read count 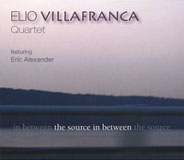 Cuban pianist Elio Villafranca has found the way to celebrate both his Latin jazz roots and straight-ahead jazz influences on The Source In Between. Along with tenor saxophonist Eric Alexander, drummer Dafnis Prieto, bassist Jeff Carney and also featuring saxophonist Yosvany Terry, hand percussionist Arturo Stable and drummer Ferenc Nemeth on selected tracks, Villafranca wends his way through a selection of original compositions that bespeak of both the Latin and jazz genres.

Ordinarily a CD with only original compositions can be problematic because there is no base from which to interpret, but Villafranca is an accomplished pianist who displays an ability to combine the emotional values of conventional Latin pianism with some of the cerebral ones of bop, post-bop and free jazz, finding a new territory in which to inhabit. The album's title is his name for locale and the title track is a straight-ahead bebop melody with a Latin percussive figure excitingly defined by Prieto; the tune also appears as the last track in a "Latin re-mix" featuring fine work by Stable on tumbadores. Alexander hands in memorable moments with a blistering solo as well as on the haunting ballad "The Lonely One." But it is the ways he and Villafranca develop ideas in interplay as well as separately that make this CD stand out. Prieto and Carney provide support all the way through and exhibit solid performances, especially on "Oddua Suite," a theme that sounds as if it was drawn from Cuban folk music.

It is evident from this most enjoyable album that Villafranca will have much more to say musically in the future as he continues to explore The Source In Between.