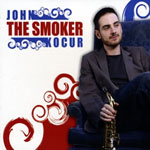 John Kocur's first album as a bandleader is an enjoyable and varied recording, showcasing not only the alto saxophonist's own emerging talent but also those of band mates Amy Bormet on piano, Oliver Albertini on bass and C.V. Dashiell III on drums.

Washington D.C.-based Kocur produced the album as well as composing all of the tunes. The compositions are mainly straight-ahead and clearly influenced by the playing of past masters such as Johnny Hodges and Cannonball Adderley, but they are not simply derivative and the ballads in particular display a maturity in writing and playing.

"The Touch of Her Hair" is a sax-led ballad that could have come straight from the American Songbook. Kocur's alto is emotive without becoming cloying, and he resists the temptation to overplay, keeping the lines simple and hence more effective. Despite the title of the four-movement "Japan Suite," there is no obvious oriental influence on these tracks: "Movement 2" is the funkiest tune on the CD, thanks in particular to Albertini and Dashiell's bass and drums, while "Movement 4" contains a short but powerful solo from Dashiell and some raucous alto from Kocur.

As soloists, all four band members prove themselves to have imagination as well as skill. Bormet's piano introduction on "Unanswered Questions" is especially noteworthy: a delicate and restrained solo that melds perfectly with Kocur's sax at the halfway point of the tune to create a duet that represents the high point of the album.

The quartet's ensemble playing is excellent throughout, although occasionally the production results in the rhythm section becoming rather too loud and intrusive—Albertini's bass on "Sheddin,'" for example. Overall, however, production quality is high. This young quartet of musicians has much to be proud of in this recording, which has confidence, inventiveness and flair.