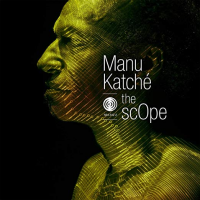 Manu Katche's tenth album as a leader, the ScOpe encompasses modern and ancient music, tribal and global music, and illustrates why he is not only one of the world's best drummers, but much more.

Katché entered the Paris Conservatory as a pianist but switched to percussion as his studies progressed; his mature style eventually incorporated his French and African roots into this classical training. the scOpe emphasizes the melodic nature, alongside the rhythmic and percussive nature, of Katché's unique drum style. "I have built the tracks around the drums, and it is no wonder I've always played that instrument—my Dad's from the Ivory Coast," he suggests.

the ScOpe features more songs with vocals than often found on a drummer's project. A beautiful ode to peace and love titled "Let Love Rule" co-written and performed with singer-songwriter Jonatha Brooke is this set's best song: Katché's gentle electronic background beat provides the rhythmic cushion for Brooke's earnest vocal, with Alexandre Tassel's plaintive flugelhorn easing in and out without creating so much as a ripple in the mix.

But there's no shortage of other beautiful music here. Katché polishes the repetitive groove of "Glow" until it shines, and its old-school soul strings in a space-age feel make the production somehow feel both full and full of empty space. He steers the straightforward beat "Please Do" toward but not quite into trip-hop, splashing his cymbals for maximum rhythmic effect.

Tuned percussion simultaneously plays the melody and rhythm that reveals the industrial-strength instrumental melancholy of "Goodbye For Now" to close this set in soft, reflective notes and tones. The electric rock, house and disco of "Tricky 98': Le Match de legend," recapturing a single he released in late 2018, feels tacked onto the end.