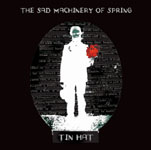 Just about everyone who's been following the band formerly known as the Tin Hat Trio has been excited about this album. We all wanted to know how Mark Orton and Carla Kihlstedt would carry on after co-founder Rob Burger flew the coop. Turned out the answer was "Expand and beef up."

Clarinet madman Ben Goldberg had one of last year's best records (The Door, the Hat, the Chair, the Fact); harpist Zeena Parkins has played with freaky folks like Fred Frith, Elliott Sharp and Ikue Mori; and horn-plus-everything-ist Ara Anderson has played with Tom Waits and leads a hipper-than-thou ensemble called Iron & the Albatross.

So how do these new people fit within Tin Hat's established jazz/Americana/classical style-of-no-fixed-style format? Pretty well, overall. In fact, it's hard to tell that the new people in the band are new at all. Everyone writes, everyone plays beautifully either in solo or in support. Intricate new numbers like Goldberg's "Drawing Lessons" and Anderson's "Old World" fit in right alongside pieces by Kihlstedt and Orton. It's all so... so... so reasonable!

Take, for instance, "Janissary Band." This fun, strange marching band number by Kihlstedt is highlighted by Anderson's trumpet line and underpinned by everyone else. It is followed by Orton's pretty waltz "The Comet," which shades western and then goes all alt.country.ambient in the middle so that Orton can peel off some amazing acoustic runs.

It is kind of hard to hear Parkins in here sometimes—she has only one writing credit (the scrappy solo piece "Black Thursday") and disappears on many songs. It's all very different from the Frith free-for-alls she's been part of.

Actually, I kind of wish there was more out-there noise-freak stuff here. The mood is usually minor-key melancholy; this is best summed up in Kihlstedt's vocal on "Daisy Bell," where she manages to out-creep the version sung by HAL in "2001: A Space Odyssey." So much is held back, repressed, pruned like a bonsai tree... don't these people ever loosen up?

Well, actually, they do. "Blind Paper Dragon" is a ramshackle thing that manages to sound jaunty, even though it's just another violin-driven math-jazz exploration. Tracks like this one and "Dead Season" are reminders that these musicians aren't entirely humorless. I'm hoping they remember this as they go along. Don't get me wrong: I love the dark. But dark is only dark because there is such a thing as light. If you get me.

Overall, a great try, and a splendid reinvention of the band. Everyone can stay. Next time out, though, the ambition and the drama might need to be amped up just a touch. Too tasteful means, y'know, snoozeville. In the meantime, this will serve as a fine first record for this talented quintet.