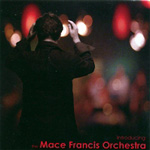 Composer/arranger Mace Francis formed his orchestra three years ago as an outlet for creative music in Western Australia, and this album, in which the twelve-piece ensemble is "introduced, is actually its second. The first, Chinese Whispers, was recorded four months earlier (in August, 2005) as a part of the Jazz Concert Window Series at the West Australian Academy of Performing Arts, Edith Cowan University, Perth.

All of the tunes on Introducing were written by Francis, and they lay bare an explicit fondness for the music of Bob Brookmeyer, Maria Schneider, Gil Evans, Jim McNeely and perhaps Thad Jones, while at the same time giving voice to Francis' own forward-looking concepts. Even as they are thoroughly contemporary, his themes are melodically pleasing and rhythmically strong, with a good deal of their underlying power emanating from the orchestra's hard-working drummer, Greg Brenton.

Francis is at his creative best on "The Preacher Is Broken, cleverly turning Horace Silver's jazz classic inside out by revising harmony and tempo as the orchestra sings his praises, Brenton inflames the congregation, and trumpeter Ricki Malet and tenor Alistair McEvoy deliver their own provocative sermons. Flexible trombonist Catherine Noblet is featured on the tasteful and refreshing "Lemon Water, smooth trumpeter Callum G'Froerer on the placid "Melodian Melody," supple guitarist Johanne Druitt on the chorale-like "Lido Lowdown and pensive "Why A? G'Froerer and Noblet share solo honors on the flag-waving "Say That Again, the only number repeated from the orchestra's earlier album.

Francis has definite goals in mind, and has assembled a first-class ensemble to help him reach them. Based on this introduction, one can't disprove the assumption that you'll be as pleased to meet the Mace Francis Orchestra as I was.

Lemon Water; Lido Lowdown; Melodian Melody; Say That Again; Why A?; The Preacher Is Broken (48:07).