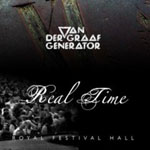 Van Der Graaf Generator was always different than its '70s progressive rock contemporaries. Groups like Yes continued to record new material despite considerable acrimony and comings and goings amongst their classic lineups, but on tour they almost exclusively emphasized their '70s repertoire. VDGG dissolved in the late '70s—the result of the rigors of touring and bad finances—but everyone remained in touch, often showing up on singer/primary songwriter Peter Hammill's subsequent solo albums.

The group reconvened in 2004 to see if there was anything left to be said, and Present (Charisma/Virgin, 2005) suggested that not only was there life left in the group, but it was capable of new material reflective of artistic growth while maintaining its own characteristic identity. VDGG's subsequent European tour in support of Present was enthusiastically received. With the release of the double-disc Real Time, as good as anything the band has ever recorded, fans who missed the tour can now assess for themselves whether or not VDGG still "has it."

It does. VDGG was never about instrumental virtuosity, even though Hammill, organist Hugh Banton, saxophonist/flautist David Jackson and drummer Guy Evans are anything but slouches. Hammill recently revealed that during the recording of Present they spent a lot of time listening to Miles Davis' A Tribute to Jack Johnson (Legacy, 1970). Real Time may not speak that language, but in its adventurous pursuit of the unexpected, VDGG might be considered to be aligned with the spirit, if not the letter, of jazz.

VDGG has always been about the songs. Often dark and disturbing, the group majestically delivers the material with a maelstrom of energy that often feels like a vicious animal trying to escape its cage. It's no surprise that the punk/new wave movement of the late '70s related to VDGG, a raw and visceral alternative to progressive rock's impressive but often meaningless virtuosity. Hammill's fervent, sometimes primal scream-like delivery may be melodramatic, but it's never less than completely honest.

The fourteen songs on Real Time represent a cross-section of material from the group's entire discography, positioning material from Present (the disturbingly transcendent "Every Bloody Emperor" and equally powerful but less turbulent "Nutter Alert") as new classics alongside old ones, including the tumultuous "Killer" and stately "Refugees." Other highlights include vital versions of "Lemmings" and "Man-Erg" from the group's classic Pawn Hearts (Charisma, 1971). The studio versions were built on layers of instrumentation and effects; here the group is stripped down, but no less powerful—or terrifying.

While a significantly altered version of VDG (dropping the "Generator" from the name) released a live album in the day—Vital (Charisma, 1978)—Real Time is the disc fans of the classic lineup have been waiting for. It delivers on every count, so the only question now is: was this a one-time reunion, or will VDGG continue? One can only hope.