By C. ANDREW HOVAN
November 1, 1999
Sign in to view read count
Unless you've been out of town for many months, you're probably aware of what has become one of the most spirited jazz industry events in recent memory. Specifically, accomplished recording engineer Rudy Van Gelder was asked by Toshiba-EMI in Japan to personally remaster a great number of the Blue Notes that he almost single-handedly recorded during the '50s and '60s. The success of these reissues in Japan has been so resounding that currently Van Gelder is working on the second set of one hundred discs to be issued there through March 2000. Of course, we're playing it a bit more conservatively here in the States with a new issue of six titles bringing our numbers in the RVG series to 30. 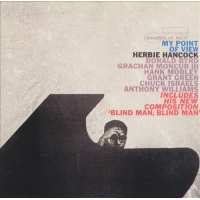 In no particular order then, we begin this look at the most recent installment of RVG discs with Herbie Hancock's My Point of View, the third of the pianist's sets to get the Van Gelder treatment. Certainly an album that many consider the runt of Hancock's great Blue Note catalog, a closer examination of this collection will actually reveal a prototype of the eclectic approach that is really Hancock's trademark. The opening "Blind Man, Blind Man" is obviously reaching for the funky crowd that ate up "Watermelon Man" and while it never became as big a hit, the unfair comparison to its predecessor can cause one to miss a truly playful and groovy number. Both "A Tribute to Someone" and "The Pleasure is Mine" are sumptuous lines that create an enduring impression, while "King Cobra" has the kind of shrewd construction that marked Hancock's writing for Miles Davis at the time. No wonder then that drummer Tony Williams finds himself so much at home on "Cobra." A tentative alternate of "Blind Man" is added here to little effect, yet Van Gelder's sonic upgrade is certainly worth the price of admission. 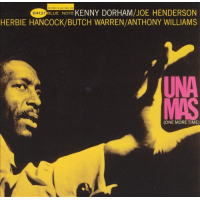 We encounter Hancock and Williams again for Kenny Dorham's masterful 1963 magnum opus Una Mas. Both Williams and tenor saxophonist Joe Henderson would be making their debut appearances on Blue Note and while the playing time is short, the band is long on ideas. The opening title cut sets up a funky bossa groove that's so "in the pocket" at times it's scary. Over the course of 15 minutes Dorham, Henderson, and Hancock spin variegated chorus after chorus, reaching an orgiastic conclusion following Kenny's shout of "Una Mas" (a sort of variation on Basie's old "one more time"). Ingeniously built from a mere riff, "Straight Ahead" is a perfect example of Dorham making much out of so little. It also contains a superior solo spot for Williams. Rounding out the original album is the slower simmering "Sao Paolo," with one extra cut added again to no great advantage. A near perfect performance, Una Mas is one of Dorham's classics and that it belongs in any respectable hard bop collection is a given. 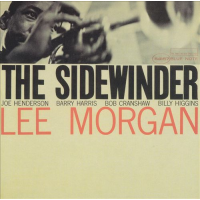 Once Blue Note hit it big with Lee Morgan's "The Sidewinder" there would be no going back. The distributors and the public clamored for more and so subsequent releases would always include at least one funky line in a similar vein. For Morgan the challenge was on, how could he create a successful follow-up to his unexpected success? The answer came in the guise of 1965's The Rumproller, a truly majestic effort that has been overlooked due to the fact that it failed to build on the commercial potential of "The Sidewinder." The title track, oddly enough penned by Andrew Hill, has a decidedly inconclusive feel to it, made even more obvious by the excellent material that follows. For starters, "Desert Moonlight" is plainly one of Morgan's finest compositions, with "Eclipso" and "Edda" equally beguiling and devoid of the formulaic constraints of some of Morgan's other lines. An adequate take of Wayne Shorter's delightfully satirical "Venus Di Mildew" is added to the original program, although it would fare much better on Hank Mobley's A Caddy for Daddy recorded a few weeks later. Solid work from Joe Henderson and pianist Ronnie Mathews also contributes highly to this pleasing set that's simply a "must hear." 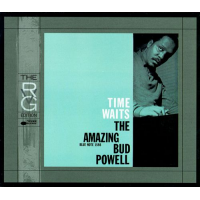 Turning to material from the late '50s, we get an odd choice for the Van Gelder treatment with the reissue of Bud Powell's final Blue Note. Time Waits, from 1958, features a trio with bassist Sam Jones and drummer Philly Joe Jones. Critically considered a lesser-light when compared to the pianist's earlier masterworks, this album is nonetheless a very rewarding one that benefits from a great rhythm section that spurs Powell on to play beyond the usual. It also helps that all of the tunes are original, and while none have the classic design of an "Un Poco Loco," each one has its share of prickly twists and turns. One of Van Gelder's finest endeavors from the Hackensack studio, the overall stereo balance and holographic imaging goes a long way in bringing more detail to what has become an unfairly overlooked minor masterpiece. 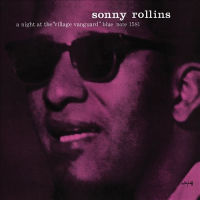 A historic artifact as it would be the first "in person" set to be documented at the legendary club, A Night at the Village Vanguard is also a unique document from Sonny Rollins' large catalog. Sounding as radical today as it did when recorded in 1957, The titanic improvisations that spew forth from Rollins' horn with such fluency are supported merely by bass and drums, a forward-thinking approach that still is far from typical. This cutting edge music was documented in state-of-the-art style by Van Gelder originally and it was an inspired choice to have him revisit these tapes, not to mention having all existing takes gathered for the first time on a 2 CD set.

With bassist Wilbur Ware and drummer Elvin Jones on board, Rollins explores 16 standards that average around ten minutes a pop. A 14-minute romp through "What Is This Thing Called Love" is prototypical, with Rollins wrenching every thematic permutation possible from the basic line. It's a knotty performance that is overwhelming at first. There's a sense or urgent immediacy throughout both discs that might bode well to distribute your listening to them over a period of time, allowing their multi-faceted brilliance to unfold slowly. 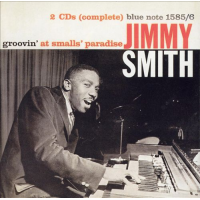 The magic of a live performance creates another modern gem, with Jimmy Smith's Groovin' at Smalls' Paradise, the only new RVG set to present material that has never seen stateside reissue on disc before. This two-disc collection presents everything recorded on a cold November night in 1957, with four cuts being previously unissued. Smith's trio, with guitarist Eddie McFadden and drummer Donald Bailey, was caught in prime form and a lengthy take on "Indiana," which opens disc two, is likely to be the best moment of Smith's incendiary playing ever captured on tape. And that's just one of a dozen other impressive tracks. Smith always responded well to the vibe provided by a live crowd and every one of his live performances is worthy of discovery, with Van Gelder's groundbreaking recording job an asset in accurately capturing Smith in all his glory.