By JOHN KELMAN
October 5, 2010
Sign in to view read count 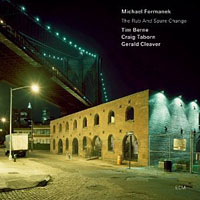 With a discography that's growing with each passing year—expanding into territories new to both the label and music in general—it's difficult to understand the need for some to apply a reductionist stance to the music of ECM, whitewashing it with descriptions like "melancholy," or "Nordic cool." One listen to bassist Michael Formanek's ECM debut, The Rub And Spare Change, quickly dispenses with these—and many other—mythic generalizations that simply cannot describe a label that, in its fifth decade and with over a thousand releases, represents the broadest purview in the history of jazz, improvised music, and beyond.

Formanek's diminutive discography as a leader contrasts with busy work as a sideman, extending from the modern mainstream of pianist Fred Hersch to saxophonist Tim Berne's left-of-center nexus of complex form and unfettered freedom, Bloodcount. The Rub And Spare Change gravitates more towards Bloodcount's avant-edged extremes; those accusing ECM of avoiding dense, angular free play need look no further than the 17-minute "Tonal Suite." Here, Formanek combines an intro that actually swings (another ECM myth debunked), with a gradually expanding improvisational radius, where pianist Craig Taborn's assertive stance gradually morphs into a time-based yet still temporally fluid free-for-all, as the bassist and drummer Gerald Cleaver somehow retain an undercurrent of groove, even as Berne, who rounds out the quartet, avoids the obvious—layering, instead, lines that range from pulsating, counter-rhythmic support to rapid-fire soaring ascensions—curiously kept out of the front of the mix to engender an even more completely collaborative ambiance.

Egalitarian it may be, but with Formanek contributing all of The Rub And Spare Change's six compositions, it still possesses a leader with perspicacious focus. Amidst the organized chaos of "Too Big Too Fall," Taborn's dissonant note block chords—with Berne layering slow-built but powerful lines—quickly contrast with darker passages, where spare but oblique melodies, working from the same premise of repetition as their more extreme thematic cousins, gradually intensify, signalling a return to Taborn's quarter-note voicings with relentless inevitability.

There are moments of beauty as well, though the persistent, irregular-metered piano figure that drives the mid-eastern-tinged "Twenty Three Neo" creates an unsettling foundation for Formanek's arco and Berne's equally considered alto, which move, in turns, from orbiting gravitational opposites to lucid, coincident partners. Cleaver—who, with his work alongside bassist Miroslav Vitous, both separately and in trio with guitarist Terje Rypdal, has emerged as a new percussion affiliate to the label—moves effortlessly across Formanek's always demanding music, combining textures, both atmospheric and grounded, with complex rhythmic subdivisions and attention to the smallest detail. The ubiquitous Taborn continues to posit an encyclopaedic stance, ready to turn on a dime with absolute precision.

The Rub And Spare Change is Formanek's first album as a leader since Am I Bothering You? (Screwgun, 1998). With a group this vibrant and instinctive, performing music that combines rigor and reckless abandon, on a label ideal for Formanek's expansive artistic purview, here's hoping another decade doesn't have to pass before the bassist reconvenes this group for another go around.

Twenty Three Neo; The Rub And Spare Change; Inside The Box; Jack's Last Call; Tonal Suite; Too Big To Fail.