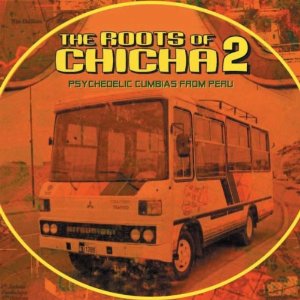 The modern tradition of cumbia music in Peru goes back to the 1960s. But in the 1970s, cumbia began to be known as "chicha," the name for an alcoholic drink of which the Incas were famously fond, and cumbia and chicha both somehow became associated with the poor and downtrodden living in Peruvian slums—ghetto music.

Just like the cresting and crashing guitar sound of Dick Dale and other practitioners defined 1960s surf rock, chicha roots in and grows out from its thin and wiry, trebly electric guitar sound. Los Illusionistas' "Colegiala" was a popular cumbia single, awash in mysterious whiffs from the Middle East and the Caribbean that arise from its simple melody. Los Illusionistas were based on the proven model of Los Destellos, whose "Cumbia del Desierto" ("Cumbia Desert") suggests a guitar band and a Latin percussion ensemble marching—no, dancing—together in a parade through downtown Cairo. Enrique Delgado and Fernando Quiroz swap funky old fuzztone guitar in "Constelacion," which opens this collection.

Guitarist Manzanita and his percussionists (Manzanita y su Conjunto) absolutely kill "El Hueleguiso" and "Agua," the most dynamic and Latin-sounding of all these tunes. While guitar and organ jam through these tight little melodies, timbales and percussion swarm over and submerge them like an army of hungry ants—stone cold groovy psychedelic cumbia.

Even if some of this music did not age so well, most of this spirit did.