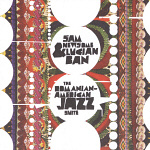 The Romanian-American Jazz Suite, by soprano saxophonist Sam Newsome and pianist Lucian Ban, is another very good example of how the jazz aesthetic of personal expression be applied to other music (here Romanian folk music and Christmas carols) and, in essence, subsume it. The project has its genesis in an award given by CEC Artslink to promote cross-cultural projects between the United States and Central Europe, among other regions.

Having Romanian roots, Ban lent Newsome a collection of Romanian carols put together by Iosif Hertea, providing the inspiration for a four-movement suite—"Prelude," "Colinda," "Bucharest Part One" and "Bucharest Part Two"—composed and arranged by the saxophonist. A successful tour followed and a second award from Meet The Composer allowed the suite to be expanded with compositions by Ban. After returning to Romania, the band then traveled to New York to perform the suite, sponsored by the city's Romanian Cultural Institute, which led to this recording.

Harmonically, the music reflect Romania's past, with the pentatonic and minor scales used providing clearly audible links to Mongolian, Arabic, Turkish and Jewish folk music. Newsome relates in the liner notes that he used a number of techniques to overcome or prevent the melodic repetitiveness and harmonic monotony that is endemic to folk music. The results work very well and there is no strain felt in maintaining interest.

Ban's pieces include two tunes with deep grooves ("Transylvanian Dance" and "Danube Stroll"), an arrangement of a traditional Romanian melody ("Carol") and a very beautiful original ( "Where Is Home?"). The remaining tune, "Home," is composed by Ban, Newsome and Romanescu.

The music was extremely well-received in Romania because of the direct references to commonly known folk melodies, but American listeners need not be Romanian musicologists to enjoy this music and the playing of the band. There is enough fine and moving playing by Newsome, who has an awesome technique which includes circular breathing. However, he subordinates his technique to the music, applying it tastefully. Harding, although playing a mostly supportive role, lets loose occasionally and gives this mainstream music a harder-edged kick.

The Romanian-American Jazz Suite is delightful—emotionally as well as physically moving. As one might expect, live performance takes off from where this recording ends.