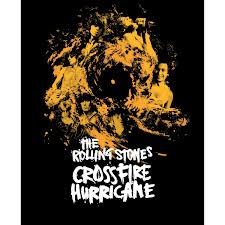 Crossfire Hurricane is not a definitive history of the Rolling Stones but, as filmmaker Brett Morgen admits, it's not intended to be. Whether or not the director knows the film is nevertheless an accurate reflection of the iconic group is arguable though. As it touches upon some, but not all, of the landmark moments during the Stones' fifty years together, it comes across just as the group so often has: a tease.

It's a tease hard to resist watching, however, if only for the very fact the group itself was involved. As depicted in their early interviews, the Stones were all too aware of the role-playing involved in celebrity and they adopted a coy approach, then and throughout much of their career, right up to this selective assemblage of footage, concert and otherwise, that accompanies the audio only reflections by the band members, taken from interviews during 2012.

Its title taken from one of the definitive Rolling Stones recordings, "Jumping Jack Flash," Crossfire Hurricane is hard to resist enjoying too, particularly for the vintage footage, but also for that of the latter-day band. Yet because some other recently-released videos, Stones in Exile (Eagle Vision, 2010), Ladies and Gentlemen, The Rolling Stones (Eagle Vision, 2010) have provided more direct insight into the personnel and musical mechanics of the band, this video piques curiosity more than satisfies it. That may be the point though, intentionally or unintentionally: to entice those not wholly familiar with their history—or even those who've forgotten much of it—to (re)acquaint themselves with the story of these largely, but not wholly, self-styled rock and roll renegades turned cultural institution.

The concept of the two-hour plus film, originally broadcast on HBO after cinematic debut in the band's British homeland, is deceptively simple as described by writer/director Margen (who's interviewed in a bonus feature). There's nary a hint of irony in his discourse, much less true revelation, or in the soliloquies from the band itself; thus, it's possible to see Crossfire Hurricane, in its deliberate superficiality, as little more than a dispensable introduction to those aforementioned, in-depth archive projects devoted to Rolling Stones history.

But Crossfire Hurricane nevertheless generates interest and piques curiosity as much by its omissions as its inclusions. Original bassist Bill Wyman is regularly pictured in mid-Sixties to early Seventies film, and quoted only slightly less extensively, but nothing's mentioned about his departure from the group in 1993. To the credit of Margen, not to mention Mick Jagger and Keith Richards, founding member Brian Jones recieves proper homage: the account of his final contribution to turns into a fitting eulogy just as the 1969 return to the stage in London's Hyde Park becomes a public funeral.

ADVERTISEMENT
Yet the description of the late musician as more technically-skilled than the vocalist and guitarist themselves belies the complementary stance of the pair on stage as depicted in performance footage from awards shows and television broadcasts included as bonus features as well, as similar content that comprises an integral part of the first hour of the film. As much as he's set apart by his blonde moptop, Jones' positioning on stage at a microphone stage right of Jagger, not to mention his attention-getting gesticulations, suggest a man fighting for prominence in a group...and knowing he's losing.

Reading Richards' autobiography as well as consulting other resources bears out the power struggle of the Rolling Stones as they moved from blues purists to pop ingénues to savants of celebrity and eventually to a collective respectability. Cunning and candid, first Jagger, then Richards, sound disingenuous in talking about their willing assumption of status as cultural icons as much as their targeting as outlaws from polite society.

Brett Margen's hidden accomplishment in Crossfire Hurricane then may lie in how he manipulated the Rolling Stones' own egos to keep the group themselves unaware of how he's positioned the individuals in the group, such as guitarist Ronnie Wood, to reveal themselves for the outlandish personae they are, even as they believe they're camouflaging the often ugly realities of their career (the intense squabbling between the two front men over the years or taciturn drummer Charlie Watts' heroin addiction and recovery circa the last studio album A Bigger Bang (Virgin, 2005). And the excerpts from the film Gimme Shelter (Criterion, 2000) give the lie to Mick Jagger's knowing control of affairs as much as his denial of insight into the departure of guitarist Mick Taylor, who filled Jones' spot in the group begs credibility.

Perfectly fine as an introduction to a series of archive pieces revisiting the history of the Stones, the likes of which the director expected Jagger to request on their first contact for this project, Crossfire Hurricane ultimately and ever-so-clearly clearly illustrates what a precariously fine line there is between mythmaking and documentary.