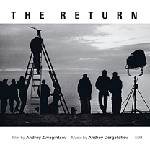 The most successful film scores are often the ones that go by unnoticed, yet whose absence would significantly alter the perception of what's on the screen. A classic example is Bernard Hermann's score to Alfred Hitchcock's Psycho. While the music stands on its own, the integration of sound and sight is what makes the classic shower scene all the more visceral, despite the fact that there is not a single shot of graphic violence.

Similarly, one can imagine Russian composer Andrey Dergatchev's score to Andrey Zvyagintsev's film The Return enhancing the visuals, something made possible by the inclusion of a number of stills from the film in the CD booklet. Combining everyday human interaction with everyday visuals that range from the starkness of nature to the clutter of the city, Dergatchev's score manages to blend the ancient with the contemporary, utilizing musical devices that spread equally across the temporal spectrum.

Dergatchev blends elements of ambient music, minimalism, gentle rhythms, spoken word, found sounds and melodic fragments, managing to somehow bring together disparate ideas in ways that not only make musical sense, but echo the paradoxical nature of the film as well. "Titles-Run joins drum programming and Armenian duduk, creating a timeless atmosphere that evokes feelings of antiquity and modernity while being neither in any direct sense. Plaintive and powerfully emotional without resorting to excess or melodrama, it's the most articulate example of the film's contradictions.

Dergatchev's use of modern technology is so organic that when a soft, minimalist electric piano pattern blends with the sound of engines on "Port, it makes perfect sense. In many ways an extension of Eno's work, in particular Apollo: Atmospheres and Soundtracks (EG, 1983), Dergatchev's music for The Return should be considered less as a manifestation of traditional musical concerns, more as an enveloping audioscape. Film soundtracks are often presented as short and discrete sound bytes, but the beauty of The Return is that it's a more or less continuous fifty minutes of music, with its own emotional and narrative arc. It's not necessary to understand the occasional snippets of Russian dialogue to appreciate the general pervading melancholy.

"Final Titles is perhaps the most conventional of the score's seventeen pieces. Still, while the insistent drum program and vividly melodic theme make it the easiest and least amorphous piece to grab hold of, Dergatchev's visual approach to the music and his innovative ability to combine the most contradictory of sounds prevent it from ever becoming ordinary or commonplace.

The most enduring film scores stand on their own, and while this soundtrack to The Return clearly works to enhance the film's understated drama, it also has its own story to tell.