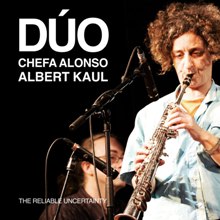 Chefa Alonso plays soprano saxophone as well as percussion; Albert Kaul plays piano and clavichord. Despite recording extensively in other contexts, their discography as a duo is in its infancy and in a state of flux; a more appropriate title here might be "The curious case of Chefa and Albert." A four-track version of The Reliable Uncertainty was released by Audition Records in December 2010 as "a first bite of the next cd-album of this duo." The four tracks are freely downloadable (as is the duo's other 2010 album, El oro del huracán, available from alg-label). Shortly afterwards, an expanded nine-track version of the album, retitled in both Spanish and German—the first languages of Alonso and Kaul, respectively—was being sold at their gigs.

Alonso and Kaul each has an improvisation-related PhD, hers for research into free improvisation and composition, his for theories for teaching musical improvisation. The Reliable Uncertainty was recorded in June 2010 in Kaul's home town at the Municipal Music School of Marburg, Germany. "Sand in the Pocket"—on both versions of the album—characterizes the duo's interactions. There are contrasts between the two: Alonso displays her knowledge of the history of improvisation through her playing—at times there are echoes of the soprano playing of Steve Lacy, Lol Coxhill and Evan Parker— but she is no copyist; the end product is her own. Kaul initially leans towards the role of accompanist, one at which he is adept, but as he moves into the spotlight he becomes a fiery soloist producing torrents of fractured chords and ideas. The fascination of their duo playing is the effect that each has on the other, resulting in a negotiated music that is somewhere between that which either might produce alone.

In concert, the improvisations of Alonso and Kaul are often accompanied by the rather cryptic moving-images of Barbara Meyer. Although the two complement each other well, the music is not designed to be a soundtrack to the visuals; it stands up well without the visuals, and vice versa.

Scrap; Sand in the Pocket; Whirl; Puddles in the Hands.

About Chefa Alonso and Albert Kaul