By John Eyles
February 4, 2022
Sign in to view read count 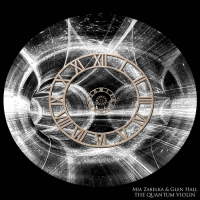 The Covid period has been kind to the extraordinary Austrian violinist and vocalist Mia Zabelka. Not only did she record and issue the much-praised album Aftershock (Subcontinental, 2021) in the company of extreme metal bassist and guitarist Arun Natarajan (aka Icos Tech) from India, and guest US trumpeter Joshua Trinidad, she also recorded The Quantum Violin with the equally cosmopolitan collaborators, Canadian electroacoustic improviser Glen Hall and Japanese guest vocalist Kenji Siratori...Oh, and along the way, in 2021, she was awarded the prestigious Austrian Art Prize in the category Music by the Federal Ministry for Arts. Culture, Civil Service and Sport. That award was made after Aftershock was released in February 2021 and before the release of The Quantum Violinin October 2021; while both albums took Zabelka into territory she has not explored before, the latter is the more extreme of the two.

Without going into details, the album is said to have been recorded, composed and mixed in the Covid months of 2020 and 2021, in Vienna and Toronto; although it is not explicitly spelled out, this implies that, as with many other Covid collaborations, Zabelka and Hall recorded their parts separately at their home bases and exchanged their recordings. Both are credited with recording, composing, mixing and producing the album, so it is definitely a joint project. That is borne out by the content of the fourteen tracks, which range in length from under two minutes to over six and a half.

The "quantum" of the title does not refer to Zabelka's violin, but indicates that Hall used a quantum oscillator alongside his other devices. The effects of these are all too obvious in the opening track, "The Quantum Violin #1," in which the violin is treated in various ways and for much of the time is subsumed in a storm of white noise; had the album persisted in that vein, long-standing Zabelka fans could well have been scared off. The second track (can you guess its title?) is more of a showcase for the violin, with occasional contributions from Hall that do not overwhelm it, thus creating a piece which manages to maintain a balance between the two players. Thankfully, that equilibrium is maintained throughout most of the tracks, with the violin and electronics together being a creative force rather than sounding like a struggle for supremacy.

The subtle inclusion of voices (from Zabelka and Siratori) in some tracks about halfway through the album was a smart piece of production, as they serve as a reminder that we are listening to music produced by people not machines. The tranquil, pastoral intro to "The Quantum Violin #11" has a similar effect. The closing track, "The Quantum Violin #14—For Pauline Oliveros" harks back to a previous award won by Zabelka, the 2018 Akademia Music Award for her 2017 composition "For Pauline Oliveros." Here, it is restructured by Hall into a drone-based piece with violin accompaniment, the tranquility of which is in marked contrast to the opening track and draws the album to a fittingly exquisite end. Oliveros would no doubt have approved...