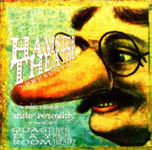 While countless artists are busily dissolving artificial boundaries between musical styles, it's still shocking to hear a group just plain nuke them. Hamster Theatre does exactly that on this two-disc set presenting alternate yet not dissimilar aspects of this genre-busting group spearheaded by multi-instrumentalists/composers Dave Wiley and Jon Stubbs. The release includes the studio recording The Public Execution of Mister Personality and Quasi Day Room: Live at the Moore Theatre, from a 2002 live performance.

The studio disc demonstrates more breadth, if for no other reason than the ability to create a broader sonic palette; Wiley alone overdubs as many as six instruments at one time. There are many antecedents to this music, but Rock In Opposition's Henry Cow and Univers Zero are two of the most obvious examples. However, Hamster Theatre is less overtly political than Cow and—with a wonderful sense of the absurd stemming from Wiley's love of Swedish accordionist Lars Hollmer—less persistently bleak than UZ.

Hamster Theatre accomplishes much in little time. The episodic "162 begins in a Clogs-like chamber space, takes on a harder edge when bass, drums and electric guitar enter, then devolves briefly into free-form Ayler-esque abandon, courtesy of reedsman Mark Harris. "We Unearth... introduces the icy cool of cascading electric piano and flute—reminiscent of recorded work by Finnish harpist/pianist Iro Haarla—but Mike Johnson's jagged guitar adds a paradoxical edge which harkens back to Fred Frith's work on Henry Cow's Unrest (Virgin, 1974). "Reddy 4 Luv alternates a brooding, tension-filled vamp with a bright and catchy theme—albeit in 7/4.

Counterpoint is the order of the day, and virtually every track is a complex intertwining of themes and influences ranging from RIO to Erik Satie, Captain Beefheart and Frank Zappa. On the basis of the studio disc, and with much of Hamster Theatre's music written for modern dance and multimedia performance, one might think they'd have a hard time in concert, but the live set allays that assumption. From the skewed polka of "The Cat Song to the quasi-Latin rhythm of "But Di Lie Town So, the group's palette may be more limited, but its musical references are anything but. It's also clear that improvisation is a part of Hamster Theatre, but generally under controlled circumstances.

It's been suggested that stylistically defiant bands like Univers Zero are creating a classical music for the new millennium. The same can be said about Hamster Theatre, which possesses an even greater range than UZ. The Public Execution is a challenging but evocative and completely enthralling listen.

CD1: Race Against Time; "162"; We Unearth the Lost Book of Mister Personality and Its Consequences; Reddy 4 Luv; The Quasdi Day Room Ceremonial Quadrille; Love Theme from "All Clytemnestra on the Western Front"; Oye Comatose; Litost; La Sacre D'Merde; The Quasi Day Room Ceremonial Tango; The Fairytale in Reverse; Phoenix; It Was Only a Dream. CD2: Bean Dance; The Cat Song; But Di Lie Town So; Jeanne-Marie; Bug 2: The History of the United States of America; Vermilion Hue Over Lake Lausanne; Tick Fever; Ving Vang; Home; The 5; Hamster Dance; The Bug Show; Cat 2: Seige on Hamburger City.