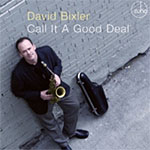 Call It A Good Deal is a plainspoken name for an elusive and thoroughly engrossing recording. Alto saxophonist and composer David Bixler's third outing as a leader transcends familiar categories. Bixler writes gorgeous, expansive melodies that seldom linger in one place for very long. His compositions favor odd time signatures, as well as changes in meter and tempo. He frequently augments asymmetrical themes with variations and secondary motifs which move in and around the improvisations. Never sounding academic or fragmented, the consistently changing landscape of Bixler's music traverses long distances in small, palatable increments, and there's a distant air of familiarity in everything the quintet plays.

Apart from the breadth of Bixler's compositions, the recording's success rides on a flexible, knowing rhythm section. Although Ugonna Okegwo's judiciously placed bass lines usually guide the band in an unobtrusive manner, his pointed notes dart around the melody of "Game Face. Andy Watson's discrete, loose time feel works well with the changeable nature of the material. The drummer's playful accents scurry about the grinding, insistent foundation of "Aiding and Abetting. Guitarist John Hart's tone and attack varies to meet the requirements of each composition. Subdued, unaccompanied musings make for a modest introduction to the stately "Unraveled, and his nimble chords provide a fine backdrop for Scott Wendholt's extroverted solo on an up-tempo section of "Gemenlie.

While Okegwo, Watson and Hart create a thickset, slow-to-medium straight-ahead groove during another segment of "Gemenlie, Bixler begins his solo by coaxing long, dense tones from the horn, briefly plays explosive bop-oriented runs, then dives back into the rhythm section's propulsive stew. He's the lead voice, yet it's hard to imagine the solo without the others moving around him, each in his own related orbit. Like Bixler's other improvisations on the recording, the somewhat deliberate lines enable us to savor each note, and he maintains a certain level of tension without resorting to histrionics.