The Preservation Hall Jazz Band at the Space at Westbury 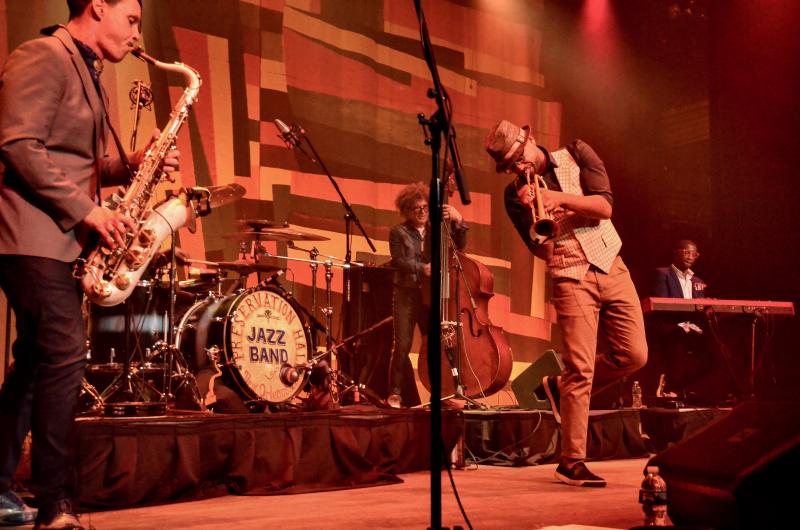 Over the years the band has released over 30 studio and live albums. The most recent albums that the group has released American Legacies with the Del McCoury Band (McCoury Music, 2011), and the Sony/Legacy releases The 50th Anniversary Collection, a career-spanning boxset released in 2012, That's It! (2013) and So It Is (2017). Preservation: An Album To Benefit Preservation Hall & The Preservation Hall Music Outreach Program (featuring collaborations with, among others, Louis Armstrong; Terence Blanchard; Merle Haggard; Richie Havens; Dr. John; Jason Isbell; Pete Seeger; Jim James; Angelique Kidjo; Blind Boys of Alabama; Amy LaVere; Steve Earle; Buddy Miller and Tom Waits) was released on the Preservation label in 2010.

Touring behind the recently released So It Is, the band delivered an eleven song main set of vibrant New Orleans jazz, treating the crowd at the Space at Westbury to an evening of immediate gratification. With the stage bathed in red and pink lights and no opening act to hinder the band's set-up, Jaffe's tuba was placed off to the side of the stage, its bell emblazoned with "Preservation Hall Jazz Band,"

Maedgen and Johnson were set-up on the opposite sides of the stage, bookending the other players. The mostly middle aged audience (with a few Millennials sprinkled in for flavor) was treated to a performance in which the Crescent City took its rightful place. This was especially true on tunes like the swinging opening number "Higher Ground," "Go To The Mardi Gras" (sung by Johnson), "Tootie Ma Is A Big Fine Thing," and "So It Is" on which the sextet's instruments intermingled to create a dense, swampy and jazzy atmosphere.

Other highlights included: a fast and upbeat version of "Santiago" that featured a solo by Maedgen, a swinging take on "Convergence," "Innocence," "La Malanga" and "One Hundred Fires." The main set ended with a jamming version of the appropriately titled "That's It." This jam allowed each of the players to shine with each taking a mini solo. Roussel's solo and performance on the tune was especially amazing—his fingers were a blur as he tinkled the ivories.

On the encores, the audience members (many of whom were dressed in the purple, gold and green colors that are synonymous with New Orleans) shook their Mardi Gras beads and bopped around the venue's large dance floor. Prior to the first encore, Jaffe praised Johnson. He said that Johnson had been one of his students and added, "How great it is to share the stage with him!" Jaffe then switched from bass to tuba for the band's standout performance of "Bucket's Got a Hole in It" with a snippet of "I Hear You Knockin'" segueing its way into the middle. Johnson's vocals were spot-on. The evening came to a close with Jaffe along with Lewis at center stage, riffing and scatting. Jaffe then retreated to his place at the back of the stage and the band closed with a rousing version of "I Ain't Mad At You."

The band brought a little bit of New Orleans to Long Island. Ex-pat New Orleanians were thrilled. The performance brought those folks a small piece of home. Others in attendance, who weren't natives but had fallen in love with the fabric of that city, were given the opportunity to feel a part of the tradition that can only be found in New Orleans' music and history. The Preservation Hall Jazz Band has been keeping that flame alive for over 50 years. Let's hope that the fire never dies.