Jeremy Woolhouse: The Persistence of Dreaming 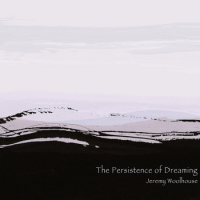 Dreams and reality have an odd relationship that's neither completely antagonistic nor complementary; either one can influence the other, as thoughts bleed across different worlds in obvious or subtle fashion, but they exist in separate realms. Minute-to-minute, real life actualities and imagined, in-the-mind occurrences are inextricably linked, yet permanently separated by an impassable divide, and this paradox is at the heart of The Persistence Of Dreaming.

Australian pianist Jeremy Woolhouse takes a gentle journey through the recesses of the conscious and unconscious mind during this suite for solo piano. Ruminative excursions, plaintive paintings and measured melodic explorations are visible at every turn, as Woolhouse establishes himself as a thoughtful, to-the-point composer and performer. Emotion is ever-present in his work, but a living-in-limbo ambiguity clouds these emotions as he attempts to reconcile the irreconcilable.

Mournful turns and grey-streaked horizons appear frequently across this twelve-song program, as Woolhouse works in a world where the sun occasionally peaks through the clouds, but darker skies tend to dominate. He understands the anatomy of melancholy more than most, but that doesn't mean his music is manic; rays of optimism, however brief they may be, appear in virtually every piece. Most of the standout tracks appear on the second half of the album, where Eastern European-influenced sonic sadness ("Awakening To Darkness"), macabre dance ("The Uncomfortable Present") and springing hope ("Reality Revealed" and "Alone, In A Pressing Crowd Of Thoughts") share space, but a gem or two can be found at the top of the program as well ("The Third Person").

The persistence of modesty and the sheer length of this suite, which clocks in at just over sixty-five minutes, are the only issues that surface during this tug-at-the-heart-and-mind journey. While suites are often best absorbed, understood and digested in a single sitting, a certain sameness that exists during The Persistence Of Dreaming makes the hear-a-few-tracks-at-a-time option preferable.