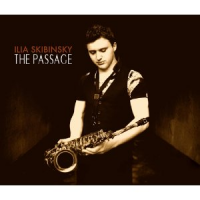 Saxophonist David Binney's Mythology Records imprint is used sparingly, but when this maverick music man chooses to release albums under its banner, they tend to be bold and brimming with the excitement of the unknown; The Passage is no exception. With this debut, Russian-born/Israeli-bred/New York-based saxophonist/composer Ilia Skibinsky joins the elite Mythology roster, which includes post- modern piano marvel John Escreet and Binney himself. Skibinsky may not be as edgy as Binney, and his compositions may not be as aggressively exploratory as those of Escreet, but he shares both artists' love for the unorthodox.

The Passage presents nine original Skibinsky tunes which touch on all matter of style, sound and direction. While the majority of the album features a quartet, the two- part title track gives pause to admire some guests. Guitarist Mike Moreno, trumpeter Mat Jodrell and tenor saxophonist Matthew Silberman help Skibinsky in his efforts to address an exciting big picture compositional esthetic. The guests depart for "Seven Skies," which finds Skibinsky mixing elegiac tones with Middle Eastern ideals. His soprano saxophone work hits a nerve here, as he fleshes out emotional tides of aural thought. His only other soprano turn—"Dorian Ways"— presents a completely different player; one who takes flight in brilliant fashion. Skibinsky assumes the role of pianist on "When We Forget," which features strings and comes off more like a film score sequence than a modern jazz tune, but that's his only appearance at the keys.

While drummer Colin Stranahan's best work comes at the outset of the album, as he steers the group through the roller coaster title track(s), the virtues of Skibinsky's other band mates unfold across the program. Bassist Edward Perez can be found doubling thoughts with Skibinsky or pianist Glenn Zaleski, hitting a rhythmic stride with Stranahan, or simply going his own way. As a soloist, his work is thought-provoking and measured ("Distant Lights"). Zaleski is a probing solo presence, but one without any aggression or malice in his hands and mind; he simply likes to test the waters.

Skibinsky's diverse experiences, which include theater work, television, playing a Cirque Du Soleil show, and encounters with artists like pianist JoAnne Brackeen, drummer Bobby Sanabria, and saxophonist David Sanchez, have given him a panoramic view of the music world that informs his compositions. The Passage is full of passion, promise, intelligence and strength; if that's not a musical formula for success, it's hard to say what is.