By JOHN KELMAN
February 5, 2013
Sign in to view read count 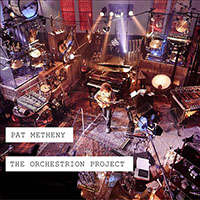 With The Orchestrion Project (Eagle Eye Media, 2012), Pat Metheny provided a detailed visual look into the workings of the guitarist's complex, custom-built conglomeration of instruments—triggered by pneumatics, solenoids and computer programs—that took this orchestral successor to the player piano (the first known version being the panharmonicon, in 1805) not just into a new century, but a new millennium. An in-depth All About Jazz review of the DVD/Blu-Ray/3D Blu-Ray release, covered the history of the project and the music performed in what was, instead of an actual live performance from Metheny's 2010 world tour, a studio recording made in a lovely old church that included the same set list, but allowed the guitarist's directors more control over the detailed, multi-camera shoot.

What the two-CD version of The Orchestrion Project allows, however, is to assess the significance of the order of events—how different a recording can be when the identical tracks are placed in a different sequence. For those of the iPod/iPhone/iPad generation who view a recording as nothing more than a collection of discrete songs to be listened to separately and shuffled around with other music this is, of course, an irrelevant discussion; but for those who still choose to take their recordings in as a whole, it is, however, a very germane one.

Metheny could have simply issued The Orchestrion Project as the audio equivalent of the DVD/Blu-Ray. Instead, it's a completely different program; even the "Orchestrion Suite"—the five compositions from the original Orchestrion (Nonesuch, 2010) studio recording—is not just re-sequenced but broken up entirely. The balladic "Entry Point" and brighter "Expansion," with its synth-driven lines and Latin-seque solo section, are kept together but placed on the first CD after the more jagged, acoustic guitar-driven opener, "Improvisation #1," and lyrical "Antonia," originally from Metheny's ambitious Secret Story (Geffen, 1992, reissued Nonesuch, 2007). By breaking the suite up, Metheny effectively turns the original Orchestrion into discrete tracks that could be played separately in the future, now that they're no longer joined at the hip, becoming grist for an entirely different narrative.

The re-sequencing of The Orchestrion Project's thirteen tunes makes this a completely different experience, with an altered emotional arc. "Unity Village," an enduring track from Metheny's first as a leader, 1976's Bright Size Life (ECM), opened the DVD but ends the CD, turning from an easy slip into, to a similarly smooth exit from the world of Metheny's Orchestrion. In between the narrative is also altered because of an unavoidable break between the two CDs. Orchestrion's title track acts just as successfully, here, as a conclusion to the first disc as it has traditionally been an album-opener, while "Soul Search" introduces the second CD with a dark-hued, quasi-bluesy and, ultimately, swinging-tone.

Artists and producers often spend considerable time deciding how to sequence tracks into a cogent order, but there's oftentimes more than one choice. With The Orchestrion Project DVD and CD, it's a rare chance to hear just how different the same songs can be when shuffled into a different sequence; both with their individual charms and both with their individual strengths.