Lists detailing the most important of anything are dicey propositions for both the author and reader. 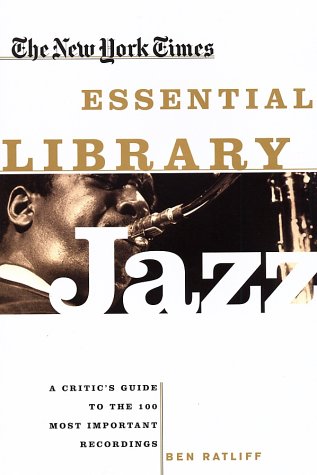 Here is a clear example of superb music writing:

"Here we enter two contiguous realms: that of Chet Baker and that of the famously weird pianist Dick Twardzik. Both are cult realms, and cults are generally sprung from empathy toward weakness rather than admiration of strengths. But jazz is a music that depends on cults, because since the advent of rock and roll jazz has been a choice, an optional mode of being that very few are born into. You aspire to see yourself as a person who loves jazz, and thus you are led toward all sorts of false idols, as well as real ones. There is no point I worrying about the truth of cults; their true value always becomes evident in time, by the process of history."

And, so New York Times Music Critic Ben Ratliff begins his essay Number 36 out of 100 of the most important jazz recordings, Chet Baker in Paris: The Complete Barclay Recordings of Chet Baker, Volume 1 (Emarcy/Polygram France, 1989). Mr. Ratliff manages to sum up the jazz journalism zeitgeist in one tidy paragraph. He further illustrates two other characteristics of this curious list: (1) its enigmatic personality, and (2) his profound apologia for his choices. In the present example, Ratliff reasons,

I retain qualified admiration for Twardzik and Baker, even if neither on his own, was top-one hundred material. (Baker checked out of being a sentient, developing musician—in other words, one who gave a shit—barely after having gotten started, and he continued on the path of least resistance for thirty-five more years. Twardzik didn’t live past twenty-seven.) This is certainly not the album it could have been with greater preparation. But it represents an unusual confluence of talent.

Lists detailing the most important of anything are dicey propositions for both the author and reader. Authors cannot help but blow whichever way the wind blows and choose a list at a given time that will change at another, future given time. Readers (and listeners), depending on their familiarity with the subject, are looking either for guidance on how to complete a collection or for a deeper understanding of the collection he or she has. For his part, Mr. Ratliff wishes away journalistic feet of clay in saying,

History, mostly, lies in the meat of [its] traditions. You oughtn’t look at jazz only by its corners, its Hot Fives and Sevens, its Kind of Blues and Love Supremes. You have to look at what the corners surround. I don’t feel good about fetishization, and I am interested in albums that saw everything that needs to be said about a particular period without having accumulated the crust of myth...

...I’ve tried to include both kinds of albums, the sacramental and the useful, sometimes favoring those that were more broadly popular, representative of an artist of his time, or directly influential on the practice of jazz rather than the legendary and one of a kind.

For the reader’s part, Ratliff has chosen to list the recordings in chronological order. This avoids a ranking of the merits of the discs which would add nothing but a distracting layer to the reading. The book begins with The Original Dixieland Jazz Band, The Creators of Jazz (1917-1936) to Jason Moran’s Black Stars (2001) with some surprises and curios within. The choices that are not surprises are obvious: Louis Armstrong’s The Complete Hot Fives and Hot Sevens, Charlie Parker’s The Complete Savoy and Dial Sessions and Charlie Parker with Strings, Miles Davis’ Kind of Blue, and John Coltrane’s A Love Supreme.

But Mr. Ratliff does throw in some interesting, if not controversial, choices. Chano Pozo— El Tambor de Cuba seems a narrow choice, though one defended under Ratliff’s "directly influential" clause above. Likewise for Bob Wills and His Texas Playboys— The Tiffany Transcriptions, Volume 3 : Basin Street Blues, though it is delightful that Western Swing receives its recognition. Tucked between Number 25—Nat King Cole Trio— Live at the Circle Room and Number 27—Thelonious Monk— Genius of Modern Music, Volume 1, The Tiffany Transcriptions don’t so much stick out as they push their way to the front where they should have been to begin with. It is in this essay that Ratliff makes the connection between Western Swing, southern California punk as practiced by the late ‘70s band, Black Flag.

Mr. Ratliff’s choice from the late discography of Billie Holiday is bold, necessary, and perfectly well reasoned. Songs for Distingué Lovers is as autumnal career recording for Lady Day, committed to media a mere two years before her death. The obvious challenger to this disc would be Lady in Satin, Holiday’s last formally released recording. But in his well-reasoned way, Mr. Ratliff defends Songs for Distingué Lovers and places Lady In Satin in its appropriate conflicted context,

To me, the cult of eleventh-hour Holiday makes sense only through the more ghoulish instincts of the jazz audience. Don’t misunderstand: there is nothing ethically wrong in liking Lady in Satin, her final studio work. She made it; she released it; she was an artist, and she controlled her image. But if it’s a religious experience, it’s a bomb-blasted cathedral. It’s depressing.

The Miles Davis catalog is very well represented. No less than five entries in the top one hundred and two in the anti-knee jerk list at the end of the book. None are real surprises. Miles Ahead is included (rather than Sketches of Spain ), Get Up With It (Rather than We Want Miles ). Gleefully included is the veiled bootleg released on the Swedish Dragon Label, Miles Davis with John Coltrane and Sonny Stitt—Stockholm 1960, Complete. This release, recorded March 22, 1960, documents a hinge in jazz history where Davis was dynamically continuing his transition from the first great quintet to Kind of Blue to his second great quintet. It would not be a totally painless growth experience. It is also the time that John Coltrane would blast off and begin his equivalent of Der Ring Des Nibelungen. After leaving Davis on this tour, Coltrane would commit "My Favorite Things" to tape for the first time, October 21, 1960.

It is in his essay on the Complete Live at the Plugged Nickel 1969, where Ratliff explains the importance of Miles Davis,

How ironic, then, that it’s Plugged Nickel —with rabbity shifts in dynamics, the deconstruction of durable old melodies, the tempo shifting, the reharmonizing performed on the fly—that you hear in an overwhelming majority of jazz groups in 2002...

...Davis specialized in making templates and then moving on as soon as they became fixed styles. How we need him to change the rules, when this particular template still dictates to us so imperiously.

Most important to me as a reader of music criticism is that it is thought provoking, well reasoned, and original. Mr. Ratliff accomplishes all in this book with an urbane, gentle style that is easy on the eyes (and psyche). This is the best book on the art of jazz I've found this year.