The Music of George Garzone & the Triadic Chromatic Approach 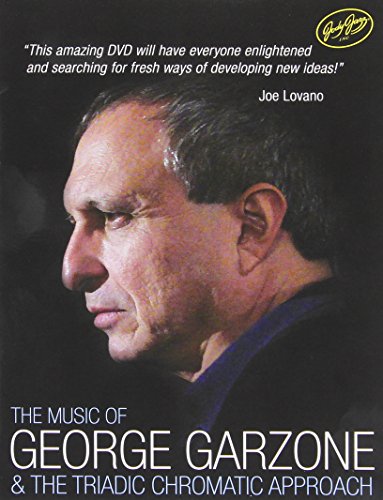 Boston-based tenor saxophonist George Garzone is one of the most overlooked giants of modern improvisation. Primarily designed for intermediate and advanced musicians interested in expanding their improvisational toolkit, this two-disc DVD set contains step-by-step instructions, narrated and demonstrated by Garzone, on how to develop a "Triadic Chromatic Approach."

In simplified terms, the concept entails generating note sequences by playing a major or minor triad in any inversion and then moving a half-step up or down from the last played note to the chord tone of a new, randomly chosen triad (of a different inversion than the one preceding it) and then continuing this process until the melodic line resolves by landing on a chord tone of the underlying harmonic progression. In contrast to the more traditional scalar approach to playing over chords, this technique of chain-linking triads creates lines that contain many notes from outside of the key area, emphasizes the vertical/harmonic rather than the linear/scalar structure of the melody and, most importantly, allows musicians to think on their feet and thereby avoid predictable repetition in their playing.

Garzone demonstrates his concept in a series of compelling studio performances with his regular combo, The Fringe (bassist John Lockwood and drummer Bob Gullotti) augmented by Mike Mainieri (vibes), Frank Tiberi (tenor sax) and Chris Crocco (guitar). The tracks include three free improvs (one a beautiful solo ballad), two originals ("The Mingus That I Knew" and "Hey Open Up") and a poignant duet rendition (Garzone and Mainieri) of "Soul Eyes." The second disc contains a series of play-along tracks over the scales to "So What"/"Impressions," "Have You Met Miss Jones?," an F minor blues and "All the Things You Are." Also included are alternate takes of solos, PDF files (including theory, lead sheets and practical etudes) and interviews with the musicians that reveal much about Garzone's training, influences and influence on a whole generation.