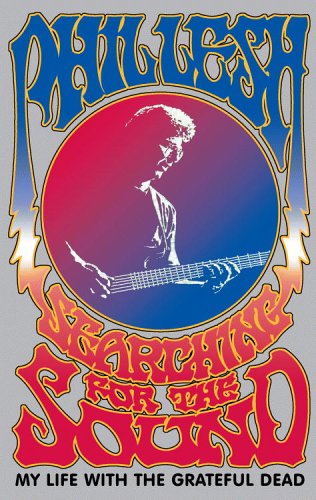 If it's not too precious a description, reading Searching for the Sound by Grateful Dead bassist Phil Lesh is like watching his life flash before your eyes. His conversational narrative moves quickly from his childhood through the carefree indulgent college days smack into his introduction to Jerry Garcia and then on to the development of this band described by the late promoter Bill Graham as "not just the best at what they do but the only ones who do what they do.

Believe that or not as you will, My Life with The Grateful Dead stands as the first band member's view of the California band that created a prototype that stands today as the essence of the 'jamband.'(structured songs interwoven with free playing or the other way round) If you are a fan of rock and roll, you will get a true sense of the history that's unfolding for a music that was originally dismissed as just a passing fad. If you are a musician or a rabid music aficionado in general, you will gain some insight into the machinations of improvisation, the likes of which rock had not know until the Dead communed.

There are some intrinsic limitations to a contemporary chronicle such as Lesh's. Even though it is not described as an autobiography, it falls prey to the shortcomings of perspective: either unable or unwilling to apply the same attention to detail to the later years with the band or the period following Garcia's death, there's a notable lack of insight or even (so-called) factual recounting of Phil's brush with death as he underwent a liver transplant, the business relationships that rent the Dead family asunder in the late Nineties or the personal and musical relationships that the surviving members of the group maintained in the same period.

SEARCHING FOR THE SOUND: THE SEQUEL

One can only hope this book has a sequel to contain stories of the conception of the Other Ones, the first-post Garcia band lineup, the evolution of Phil & Friends as a rotating cast of musicians and the christening of The Dead in recent years (in particular; how could there not be a collective celebration of the band's fortieth anniversary as at this writing has not been announced?). In the wake of Jerry Garcia's passing in 1995, Phil Lesh has become the standard bearer for the freewheeling sprit of the Grateful Dead and its legacy of serious musicianship integrated with its devoted community of fans.

For those perspicacious listeners, that development may come as no surprise. Lesh's bassplaying is second only to Garcia's guitar as the navigational force behind the Dead's improvisations and travels from song to song; perhaps the first and most telling realization to emerge from reading this book is how deep a personal bond grew between the two men, the first individuals to meet and play together in the formative process of the archetypal band.

Less profound in a musical sense perhaps, but almost equally important in personal terms, is the retelling of role of Ron "Pigpen McKernan as an integral character in the progression of the Grateful Dead from their inception as The Warlocks(see the Rare Cuts andOddities cd for an audio confirmation of his performance). As the first of the immediate family to die, Pigpen's significance in this context can't be underestimated and explains why so many recent archival Dead releases (the four-disc Steppin' Out for example) seem like nothing more or less than homages to the blues-rooted biker character that actually fronted the band early on.

WHAT KIND OF MUSICAL PIECE IS THIS?

During the course of this book, Phil Lesh pauses fairly often to offer trenchant observation on what's happening his life. Invariably, though, he makes the mistake of trying to express the ineffable, rendering his perceptions (chemically induced and otherwise) in terms either woefully prosaic or mystically overwrought. And this goes for whether he's describing Owsley "Bear Stanley's sound system experiments or the interrelationships of the musicians as they evolve minute-to-minute, while they play. It's nevertheless an endearing quality to see as you read on how Lesh invariably sees the world around him in musical terms, wither its nature, culture or his own perceptions. (see page 331). You have to wonder, though, if Lesh conceived this book along those lines as something of a musical composition and how different the organization of the book, if not the writing itself, might have been. Roughly two-thirds of the way through Searching for the Sound, Phil's tale becomes as much anecdotal as linear and it's here you long for more detail of the crucial interludes in the Dead's evolution; how great would it be to hear how the sessions for Workingman's Dead were conceived an executed, not to mention those for its follow-up American Beauty? Or how the two albums came to be produced in such close succession?

That begs the question of how much influence an editor might've had on the end result that took the form of My Life with The Grateful Dead. Perhaps the passing references throughout the book to the Grateful Dead's overall 'curmudgeonly' attitudes (epitomized perhaps by the reference to Weir's hostility (sic) suite in their hotels, in itself a thinly-veiled innuendo perhaps, compounded by one of the many priceless photos in the book) extend to Lesh and suggest not just why he invited no serious second opinion, but also commentson the general perception of the bassist/composer, who seems to engender love/hatereactions from members of the Dead community to this day. This aspect of his relationshipto the public might've warranted more inspection, as would the phenomenon of theDeadheads, a discussion of which begets a recurring them in the later part of the book asin he late eighties and early nineties, the audience ballooned past the point the band's music alone could affect it directly.

MORE OF THE MUSIC AND LESS OF THE SCENE

The scene that's described at Grateful Dead concerts, both in the parking lots and in the venues, deserves at least as much attention as the unruly likes of which mars appearances in various parts of the country in the group's final days with Garcia alive. Likewise, it'd be more illuminating to hear about Branford Marsalis' interaction with the Dead than excruciating detail about late keyboardist Brent Mydland's personal problems (Lesh does well to avoid the clichés of rock biographies most of the time). The pain is palpable, however, in Phil's description of dealing with Jerry's intermittent 'health' problems and you sense the affection between the two in various ways, such as Garcia's attendance at a concert where Lesh was conducting classical music. Because the dynamic of the Grateful Dead and the times in which they were born are so complex, it's unfair to criticize anyone trying to offer their interpretation of the events which is essentially what Phil Lesh ends up doing with this book (read Dennis McNally's A Long Strange Trip for another angle). To his enormous credit, he does an admirable job of putting his existence in the proper context of history and not just with the band: you can feel the impact of the societal upheaval wreaked by the multiple assassinations of Bobby Kennedy and Martin Luther King Jr in 1968 as well as the internal (self-inflicted?) business pressures that perverted the Grateful Dead's creativity during its last years. The financial constraints that necessitated constant touring were far removed from the perpetual playing at their own free will in their earliest days.

THE LONG STRANGE TRIP'S NOT OVER

But Searching for the Sound ultimately proves that proximity to your subject does not necessarily bring greater clarity than that afforded by healthy detachment. While the genius of Phil Lesh as a musician lies in his tremendous scope and knowledge: broader than any other member of The Grateful Dead including Jerry Garcia. Accordingly, you have to hope he revisits this generalized diary in the future; the passage of time should work to his benefit to allow additional focus thereby communicating more exactly how Phil (and by extension his bandmates) came to be such an inspired and inspiring figure in contemporary rock.

Visit Phil Lesh and the Grateful Dead on the web.