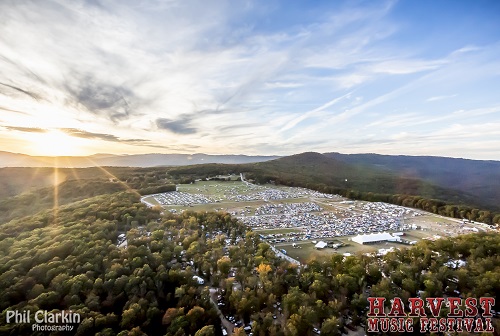 The Arkansas River Valley lies between the Ozark Mountains to the north and the Ouachita Mountains to the south. It generally parallels the Arkansas River (and US Interstate 40) for most of its length. The Valley reaches up to forty miles wide and sports geological features typical of both the Ozarks and the Ouachitas, features that include dissected plateaus like those of the Ozarks and folded ridges like those of the Ouachitas. However, there are some features are characteristic of the Valley itself, including isolated, flat-topped, steep-sided mesas like Petit Jean Mountain, Mount Nebo, and Mount Magazine.

In the past 25 years there has been an upswing in music festivals that host a camping component, essentially creating a real, if only temporary, communal living arrangement where all the participants become part of a greater good community. Most popular of these must be the Bonnaroo Music Festival held in Manchester, Tennessee each spring. A little too "nuts and berries" for your refined taste? There is much to learn from in the presence of such healing and informative music and shared company. And I intend to learn as much as I can...serving as your Virgil in this vestibule of hades...

...which is where we could possibly be were it mere days earlier in Arkansas. The southern summer is a bracing experience for the initiated and uninitiated alike. The southern fall is that too-brief, but always welcome respite from the molten hellishness serving to remind Neil Young that ..."a southern man don't need him around anyhow" as we southerners continue our penance for the sins of the past. This particular fall is a blessing in the River Valley arriving just in time for the festival. After several days of thunderstorms, the skies receded, the temperature dropped and Providence smiled on the wicked and righteous alike in North Arkansas.

A Psalm of praise. Make a joyful noise

This festival bloomed over its entirety as more and more people filled the camp grounds surrounding the venue. People arrived in cars with tents, campers (new and old) or just with sleeping bags for the event. If it were possible for Arkansas weather to improve it did. When you hear, "It isn't the heat; it's the humidity" the speaker is talking about Arkansas. But the dew point was low, the air was clear and crisp and filled with the perfume of musky, unbathed young people, fall pine and oak leaf smoke and the sweet-musty, resin-filled aroma of cannabis.

I was too young for Woodstock, but I did grow up in the new more-open-minded 1970s (at least in comparison to my birth decade, the '50s). The vast majority of those taking part in the festivities looked to be part of that subculture called "hippies" back in the day. I suspect that is this a dated characterization, if not simply politically incorrect. What did exist was a community of like-minded people, from the very young to the very old, who gladly came together with others to celebrate and live symbiotically with the living organism that is music.

The festival camping was spread our around the performance venue, which sported three stages that provided music from Noon until 2:00 AM each day. Many of the 70-plus acts appeared twice over the festival's three days. This gave those attending ample opportunity to catch their favored acts at least once, and twice if they so desired. The festival grounds offered multiple sources for Adult libations and concessions, including free water and plenty of portable outhouses.

The Mulberry Mountain Harvest Music Festival musical production was sponsored by the noted modern bluegrass band Yonder Mountain String Band (YMSB). The Colorado-based quintet were called upon to help select those acts with whom they would share stages. The band is considered a bluegrass combo, but that classification is probably as inadequate as describing the audience as being made up of hippies. This is certainly not your parents' bluegrass. Neither is it tongue-in-cheek. The festival as a whole hosts wooden music found at the edge of a stylistic razorblade where the atoms of creativity shoot off every which way.

Using the host band as an example, the YMSB played two vastly different sets, the first being shorter and concentrating on the band's studio material, with the exception of a boffo cover of Linda Ronstadt's (by way of Betty Everett, by way of Dee Dee Warwick). The second, lengthier show included Jerry Douglas and covered much from Elevation (1999), Yonder Mountain String Band (2006) and The Show (2009). The covers in the main show were inspired. A frantic "Hey Joe" and downright psychotic "Crazy Train" perfectly complemented the rest of the repertoire as the band brought material from behind the event horizon.

The main acts for the festival included the YMSB, Trampled by Turtles, Railroad Earth, The Jerry Douglas Band and The Carolina Chocolate Drops. These are the bands playing the various forms of Americana that have bobbed to the surface to achieve some measure of commercial fame. But it is the lesser-known acts that prove the most interesting.

While unfair and of questionable value, the music that orbited the YMSB and these other headliners these three days might best be classified more specifically as "hoe-down" music. While purest bluegrass was well represented, the overall timbre of the music has its roots farther west. There was a great Arkansas-Oklahoma-Missouri flavor to the music that would have been welcome at any barn dance of the late 19th and early 20th Centuries. The eclectic-ness of the music presented better represents the atomization of American rather than any structured evolution. Like jazz, all music is moving with an unimpeded entropy toward a central "Music" (with a capital "M") and beyond genre and sub-genre.

Of special note and, perhaps, representing the "norm" of the festival, was Eureka Springs, Arkansas' own Mountain Sprout.An erstwhile wooded quintet made up of banjo player, lead vocalist Grayson Klauber, guitarist/vocalists Adam Wagner and Ratliff Dean Thiebaud, bassist Daniel Redmond and newest member, fiddler Michael Schembre, who this festival, played like a hillbilly Paganini inspired by the chemical fare of the Ozarks.

The band's two sets were a little over an hour long and included music from the bands eight recordings released over the past 20 year. Well known regionally, the Sprouts put on a high-energy show that makes their musical presence come alive in ways that can never be captured in the studio. The band's latest recording, Long Time Comin' was well represented with performances of "Hot, Young Honey" and "Too Old for this Shit" (yes, it is that kind of a festival, as well as, "We Smoke it Here," "Screw the Government," "Whiskey Church of the Greenbud" and "Dry Counties" from their previous recordings. This is goodtime dance music with a seditious edge.

The variety of styles wandered well beyond that of simple mountain music. Dumptruck Butterlips , a three girl-one guy quartet (often supplemented with others) from Lawrence, KS who looked capable of playing a respectable version of newgrass but play what they call "Bedroom Soulgrass," turned out some of the most authentic Memphis Soulstew of the festival, if Memphis had been hatched on the Grand Prairie. Lead vocalist and guitarist Mustard crosses Al Green with JJ Cale for some interesting R&B twists in the plains.

New Orleans' Dirty Bourbon River Show is a curve-ball throwing brass band that begins in the NOLA tradition only to take a left at Mickey Katz and play some southern-fried Klezmer music, proving that all music and culture are local. Coyote Union from Mountain Home, AR sported one of the best musicians of the festival in multi-instrumentalist Geoffrey Watts whose fiddle and mandolin playing anchor the band in its North Arkansas terrain.

While Coyote Union pushes the envelope in a more rock-oriented direction, Grandpa's Cough Medicine keeps things squarely in the bluegrass arena while expanding the bluegrass themes of love lost and faith found into the depths of murder ("The Murder Chord"), gypsy music ("Border Patrol") and outlaw lawmen ("Crooked Cop"). A trio from Jacksonville, FL, GCM is a guitar, bass, banjo band whose outlaw bluegrass is just a little bit darker than that of the next band. Guitarist Brett Bass spent a childhood listening to heavy metal music only to become a formidable flat picker, while Mike "Banjo Boy" Coker remains squarely in the tradition of Earl Scruggs. Bassist John Murphy sings that "high Lonesome" with the best of them, even when singing about moonshine and jail.

With over 70 acts over three days, it is a challenge to find a single group to focus on, but that in no way stops me. The Oklahoma trio Red Eye Gravy is a dust-wind force-of-nature playing what their leader "The Dirty Okie" Oklahoma Cowpunk. It is best to think what music would be produced with the humid Mississippi Delta transplanted to the dry Oklahoma plains in the middle of a bone-bleached August, where the humidity is sucked from the air and replaced by a dust-bowl vacuum. Blues, country, traces of R&B and several miles of Oklahoma tradition inform Gravy's oeuvre (do they use words like that west of Fort Smith?).

The band released their eponymous recording independently in 2008 and made a name for themselves regionally with persistent touring. Their appearance at the Mulberry Mountain Harvest Music Festival supported their sophomore recording, Dust Bowl Hangover, a collection of sixteen songs that show that Red Eye Gravy should be something greater than one of the "10 best unsigned bands in Oklahoma."

With music festivals being established each year, it is gratifying that Arkansas should host not one but three in one of the most beautiful settings in the state. The Mulberry Mountain Harvest Music Festival represents the heart of an autumnal tradition that should continue to shine on.