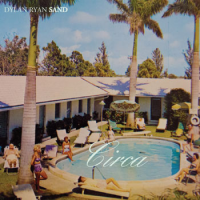 Compared to Sky Bleached (Cuneiform, 2013), the eclectic first meeting of these like-minded improvisers, Circa is a far more stylistically cohesive effort—made by what is now a working band. The trio's spirited rapport unifies the heavily amplified proceedings, lending a visceral, metallic edge to such genre-oriented pieces as the surf-inflected "Trees, Voices, Saturn" and the Spaghetti Western-inspired "Low Fell." Although the session also contains a few introspective interludes, including "Slow Sculpture," even subtle cinematic fare like "Pink Noir" and "Night Sea Journey" exude a certain rawness.

Ryan is a gifted composer, whose lyrical themes linger in memory long after a tune is over, as does the unit's rollicking cover of Keith Jarrett's infectious "Mortgage On My Soul," which blends in seamlessly with Ryan's own tuneful originals. As memorable as Ryan's writing is however, it's the dynamic interplay between the three musicians that imbues this date with its distinctive appeal.

Hoff and Ryan are keenly adept at transposing metal, punk and prog-influenced rhythms into an elastic, improvisational context, with Young's virtuosic fretwork the lead voice. An original member of Wayne Horvitz's '90s-era Zony Mash, Young is a singularly diverse guitarist, capable of alternating between delicate restraint and rhapsodic bliss at a moment's notice, as revealed in the soaring anthem "Visionary Fantasy" and the ominous dirge "Possession."

Ryan has stated that: "Sand is a jazz band, but it reflects the different things I grew up on and listen to; it reflects the fact that I am playing jazz, but that I wasn't born in 1945." Ryan's original intent to "write songs for a jazz band that had elements of Black Sabbath, the Cure, Jaco-era Joni Mitchell, and free jazz" is fully realized on Circa, an impressive and engaging album that reveals remarkable growth in defiance of the proverbial sophomore slump.