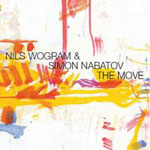 Nils Wogram and Simon Nabatov have long been musical brothers in arms. They have played in each other's quartets and recorded three albums as a duo, of which The Move, recorded at Koln's Loft, is their latest. The compositions are divided about equally. It is immediately and manifestly apparent that the two have established an innate ease and understanding. They take in classical music, add some theatrical flair, and without question extrapolate into free jazz.

Wogram's lines are thick and smooth on "Fall as he works the upper register of the trombone, gliding into the deeper recesses, keeping a lock on the pulse. Nabatov lies below the surface before kicking into high gear and setting loose quick punctuations on the piano. Then comes the interlude, the texture now light and dancing. Nabatov has changed the path into the lightness of being, but not for too long, because he and Wogram burst into a spiralling, zesty freedom.

Melody and grace combine to give "Itapo a lustrous soul. Wogram is up there getting into the depth of the composition, changing timbre ever so subtly, giving the tune new contours. Nabatov is more strident as he carves the harmonies, his approach adding the muscle and pumping the blood. Vision is determined by focus, and the latter changes as they thrust and parry with quick jabs, dancing lithely around each other. That turns out to be a short aberration before the two players get lyrical and burst into infectious melody that twirls giddily and oh, so delightfully! Wogram and Nabatov close out The Move with "Simple Sentiment, a ballad anchored in warm emotion. This is an eloquent album.

Title: The Move | Year Released: 2005 | Record Label: Between the Lines