By John Dworkin
October 7, 2005
Sign in to view read count 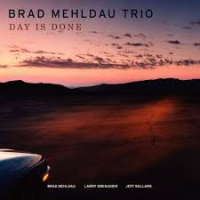 More than any other artist, Brad Mehldau has tapped into today's jazz zeitgeist. Oft-times (maybe always), a cultural zeitgeist is difficult to define or encapsulate. But you know it when you see (hear) it: In walked Brad. That's part of the function, mystery, and beauty of Art. It gives form to what would otherwise be near impossible to express, releasing a certain type of inner pressure that builds up from an inability to explain oneself. His trio's new CD, Day Is Done, is another addition to an increasingly impressive collection of relief valves.

The notion that each century has one primary art form through which its people best express themselves and the Times is an interesting one. It's been suggested that Film will be the primary art form of the 21st century. If not in agreement with this, Mehldau is at least aware, or has somehow been co-opted by the Hollywood studios to lend legitimacy to this idea. His music can be heard in such films as Stanley Kubrick's Eyes Wide Shut, Wim Wenders' Million Dollar Hotel, Adrian Lyne's Unfaithful, and others. His personal involvement with film informs his musical sense of drama.

There's a palpable feeling of personal imagery attached to much of the music on Day Is Done. It's not quite program music, yet it's distinctly visual and sensual: an alternate worldview filled with thematically related images and moments packed with shifting color, emotion, and meaning. As sophisticated and iconoclastic as some of Mehldau's ideas may be, he's almost universally accessible. Brash, literate, young, a consistent risk-taker who always seems to land on his feet no matter the heights he's leapt from, Brad Mehldau is the jazz world's P.T. Anderson. (Anderson is the writer/director of the films Boogie Nights, Magnolia, and Punch-Drunk Love. Coincidentally, Jon Brion, who collaborated with Mehldau on his recording Largo, scored Magnolia and Punch-Drunk Love)

Of all the things he does so well, the most relevant is the art of the "cover song. He is our most intriguing, creative, and genuine interpreter of the modern pop songbook. Never content to simply plug in a swing feel for the backbeat and add some solos, Mehldau has a deep connection to the aesthetics of great pop music: Most notably, the lyric content. Day is Done has music from The Beatles, Radiohead, Nick Drake, and Paul Simon. He's got a sixth sense when it comes to choosing the right material for himself and the trio in this vein, like an intuitive casting director seeing qualities in actors nobody else sees. What's more, he doesn't make it easy on himself. Often his choices are songs which don't lend themselves to standard jazz harmonic and melodic vocabulary. But he doesn't make the song come to him. He goes to the song.

While the first track, Radiohead's "Knives Out," is notable for its high, near manic energy (it was the trio's first read down!) and Thom Yorke's ever beautiful and mysterious melodies and harmony, the standout tracks remain "She's Leaving Home and "50 Ways To Leave Your Lover. For listeners familiar with these tunes, it's not a stretch to say these interpretations have programmatic elements.

The arrangement of "She's Leaving Home has a particularly story-like arc. There's a deliberate "big picture intent and execution behind this performance. Still in waltz time but much less courtly, the melancholy vibe of an intimate domestic tragedy being played out is retained from the original. Mehldau's ability to separate voices contrapuntally (like characters' lines) is used to great dramatic effect here (also as it was in the original). The solo section has a steady emotional buildup, becoming gradually denser harmonically with Mehldau consistently referencing the melody as the "leaving approaches. He respectfully and wisely saves playing the title line until the very end for emotional impact just as The Beatles had on Sargeant Pepper's Lonely Hearts Club Band. His consistent quoting of the melody throughout the piece is something that occurs through most of the music on Day Is Done. For Mehldau, melody is boss.

50 Ways To Leave Your Lover, while more of a burner, also has similar arranging choices and story-like aspects in relation to its lyric content. But the program music interpretation on this track may be more of a stretch. Something of an ode to the loose sexual mores of the '70s, Mehldau ups the ante on Simon's original tone of nonchalant sarcasm. He amps it up to an almost caustic, in-your-face black humor. Essentially blowing off the melody (it's alluded to) until about halfway through, the trio has its way with the tune at an up-tempo 7/4. After the "head, the rhythm section cuts out and Mehldau "slips out the back jack all alone for a getaway. Once they're out of sight, the boys meet up again and they're gone—like a train—on to the next key party. They're burning so hot on the end of this track it's like a dare to anyone who'd try to keep them on a leash.

Consistent, long-lasting, and creative musical partnerships are hard to come by. Let alone keeping an entire group together. There are a few such existing partnerships out there in the jazz world at the moment: Branford Marsalis and Jeff "Tain" Watts (and we hope Joey Calderazzo and Eric Revis for many years to come), Kurt Rosenwinkel and Mark Turner, of course the Keith Jarrett Trio, Art Ensemble of Chicago, and others. But it's hard to maintain. The Brad Mehldau Trio was one of those rare partnerships for the last ten years. But there's no better scenario than having Jeff Ballard take Jorge Rossy's place in the trio's drum chair. All three members have played in the same circles for many years and have even recorded together prior to Day Is Done: check out Kurt Rosenwinkel's outstanding Deep Song. This is actually where the "new" Brad Mehldau Trio had its recording debut. Here's a clip from my review of that CD just before it was released six months ago:

...that initial explosion of energy is spent during [this "new" trio's] time: Absolutely the definition of "burning" here. There are two or three moments in this solo where it gets so hot I still, after repeated listenings, involuntarily jump and utter "damn or "whoooohoooo or some such exclamation. Mehldau seemingly manifests intricate, originally formed, swinging phrases at will, and Larry Grenadier and Jeff Ballard are there at every turn to feed, reply, and push him higher.

A longtime partner of Rosenwinkel's, a former member of Chick Corea's trio, and also Joshua Redman's group, Ballard is every bit as experienced, open, and on fire as Mehldau and bassist Larry Grenadier. Also, Grenadier gets stronger with every recording he makes. When focusing on his playing alone during a blowout like Mehldau's original "Artis or the ending of "50 Ways To Leave Your Lover, the listener has to remind himself to breathe. He's that consuming. His combination of energy, ideas, virtuosity, tone, time, focus, and intensity is rare. Mehldau is well aware of this and refers to Grenadier as the group's "pivot point" and "foundation." He's well featured on Day Is Done introducing pieces and playing melodies.

If this trio stays together as long as the last, it'll be a beautiful thing—already is.