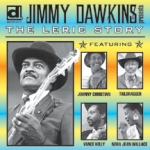 During the 1980s, Chicago blues musician Jimmy Dawkins ran his own label, LERIC Records, producing original 45s by artists entrenched in the local club scene. Now these sides have been released for the first time on CD by Delmark Records as The LERIC Story, revealing the traditional and soul-influenced sounds of a dynamic group of vocal stylists and chronicling an under-appreciated era of Chicago blues.

Many of the artists represented on this collection fell into obscurity and despite being top-notch performers who were loved dearly on the Chicago scene, never attracted the recognition of mainstream blues fans. One such example is vocalist Little Johnny Christian, whose quick-tongue, soulful emoting is heard on four tracks, including the deep-groove, Elmore James-style shuffle of "New Life." Christian's slowed-down testifying on "Ain't Gonna Worry About Tomorrow" is augmented by the exemplary guitar playing of the late Vernon "Chico" Banks who after this session, his first, went on to perform with a who's who of blues artists before his untimely death in 2008 at the age of 47.

Two of the disc's most exciting tracks come from another relatively unknown artist, the late singer/bassist Queen Sylvia who delivers two Dawkins originals, "I Know I Ain't Number One" and "Too Bad Baby," with a raspy, powerful vibrato. Featured prominently on these cuts is Dawkins' biting guitar, spiced-up with effects and drenched in hot grease. Dawkins can also be heard on "Special Kind of Love," a rare, never before released track by Robert "Big Mojo" Elem, also a bassist/vocalist who worked for years with guitarist Freddie King.

Another never-released treasure unearthed from the LERIC vault is a three-song sampling of the popular Chicago guitarist/vocalist Vance Kelly who currently fronts the Back Street Blues Band. Tail Dragger, who comes right out of the Howlin' Wolf school of blues shouting, has recently gained an international reputation with his well received Delmark concert DVDs My Head is Bald: Live at Vern's Friendly Lounge (2007) and Live at Rooster's Lounge (2009). Found here are two of Dragger's first recordings, "So Ezee" and his signature piece "My Head is Bald," highlighted by exceptional backup musicians, including Johnny B. Moore on guitar and Lafayette Leake on piano.

The soulful, R&B voice of Nora Jean Bruso, with Dawkins on guitar, shines on the funky "Untrue Love" and the sultry ballad "Oh My Love." Closing out the disc is the gospel sound of Sister Margo, aka Lady Margo, who recorded a handful of soul sides for various small labels in the 1970s. Here, with an unknown cast of sidemen, Margo delivers an inspiring performance.

The LERIC Story is full of long lost gems, more than worthy of resurfacing for an audience hungry for authentic Chicago blues.

New Life; Luv Somebody; So Ezee; My Head is Bald; I Know I Ain't Number One; Too Bad Baby; Use What You Got; The Jam; Why You Hurt Me So Bad; Untrue Love; Oh My Love; Special Kind of Love; Ain't Gonna Worry About Tomorrow; I Gotta Sad Feeling; My God is Real; Peace Be Still.