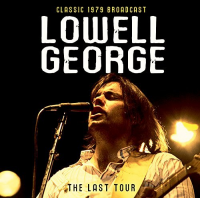 Well, you can wish in one hand and shit in the other and see which one fills up first. First, do not purchase this disc. There is absolutely no reason to as you may acquire it free from Internet Archive. specifically, at the address, Lowell George & His Band -June 28, 1979. The Internet Archive detail of this recording is thus,

"Recorded at the Listner Auditorium in Washington DC. George had recently separated from Little Feat and was touring to promote his solo LP Thanks I'll Eat It Here. This is the same venue that much of Waiting for Columbus was recorded at and was a favorite venue of Lowell George's. The next morning, George suffered a massive heart attack and passed away at the age of 34. This was Lowell George's final show."

That is quaint. In 1979 is was a "massive heart attack" while in 2016, it was a "heroin overdose." So much for truth in advertising. The sonic fidelity of this mp3 download is not that great. That in mind, it was my hope that this compact disc version would have improved this "FM Radio Broadcast" that sound suspiciously like an audience recording. However, in a phrase, it did not, and our lesson today, Pilgrims is caveat emptor and I could have recorded as good a disc in my bathtub with lighter fluid and a can of Spam.

Which brings me to my point (as I channel the humor of the Genius, Jeff Fitzgerald by inserting one line caveats...

This is a recording that any slightly rabid Little Feat-Lowell George fan must have, no matter how bad it smells. That said, and still, another 300 words to go, let's look at the surrounding history of this recording.

At the very best, Lowell George: The Last Tour is the bastard child of a wayward nun, eventually adopted by in-laws who caused my mother to wear the black paint off of her olive-pit rosary beads. It's sonics promise the release of a truck-stop hooker over a Memorial Day weekend in Texarkana, Arkansas. But in spite of all of this, Lowell George's genius remains, completely unrealized and pathetically spent. The recording is made up of eight songs, five of which are from the Little Feat oeuvre, and only the Fred Tackett-co- written "Honest Man" which is worth hearing.

That said, it is the selections from George's recently released solo recording, Thanks, I'll Eat It Here (Warner Brothers, 1979) that are the real stars. Allen Toussaint's "What Do You Want the Girl to Do?" that hold the most promise. Toussaint's piece reveals George's pop possibilities. Rickie Lee Jones' "Easy Money" is a fun romp, while George's cover of Ann Peebles' "I Can't Stand the Rain" shows a forward vision beyond Little Feat. But that is all for naught and is Oman's sin of music.