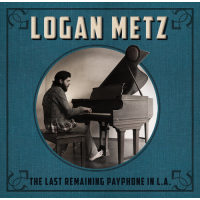 There aren't many young players around actively channeling the powerful feel of New Orleans musicians like Doctor John, let alone doing it convincingly. This doesn't describe Chicago based musician/composer Logan Metz fairly, though. His danceable, joyful music has that same spirit, but it draws on too many influences to be so quickly categorized. Not too surprising, considering the musical company he's kept. Playing stages from "backwoods biker rallies to Walt Disney Concert Hall," Metz has played with American legends like Willie Nelson, Neil Young, Bob Weir (Grateful Dead) and Kris Kristofferson (composer of "Me and Bobby McGee" and "Sunday Mornin' Comin' Down").

His debut record, The Last Remaining Payphone in L .A., is driven by acoustic instruments and employs expert songwriting bolstered by skillful arrangements by collaborator Lincoln Mendell and Metz himself. Very much in the vein of jazz influenced songwriters like Billy Joel, these songs seem poised to become instant favorites for fans of a good story set to music. Don't overlook the playing on the record, though. Short but sweet, the instrumental solos and fills that punctuate the vocal phrases are subtle yet poignant.

The first track, "Interesting People," is confident, playful and dripping with attitude. Sounding like it could have come directly off of Doctor John's Gumbo, the track features the live band that gives the record so much of its character. Worth noting especially is the sax solo. It's not just the music that makes Metz's writing unique though; his lyrics are crafted with a thoughtful cleverness honestly unparalleled. More than likely refined during the few years he spent teaching English (as well as the certain interest in language that preceded that time), the lyrics are humorous while remaining compeling.

Other highlights include the ballad "I Must Be Found," with a feel that brings to mind soul artists like Ray Charles. Metz makes the style his own without losing out on any authenticity. Likewise the title track, "The Last Remaining Payphone in L.A." channels classic country led by strumming guitars and vocal harmonies. Really, pretty much every track on The Last Remaining Payphone in L .A. is a strong offering in a style that's shamefully underutilized. Don't miss out on Metz's debut, but with any luck we'll have lots more to look forward to.

Interesting People, Almost (All Mine), The Last Remaining Payphone in L.A., I Must Be Found, Jericho, An Evening at The Cove, I Got a Woman, Augustine, Surrender, The Rabbits, Lullaby (For Everybody But My Baby (And Me))