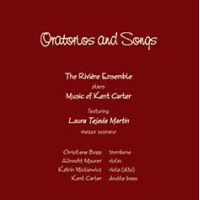 Over years, the Emanem label has built a reputation for fine releases by interesting and adventurous string ensembles such as Stellari String Quartet and Barrel. Preceding such groupings, the label released The Juillaguet Collection (Emanem, 1999) by the duo of Kent Carter and Albrecht Maurer on double bass and violin, respectively, and Intersections (Emanem, 2006) by the Kent Carter String Trio, in which the duo was joined by Katrin Mickiewicz on viola. Following that trend, it is no surprise to see that the five-member Kent Carter Rivière Ensemble centres around the trio, adding Laura Tejeda Martin's voice and Christine Bopp on trombone alongside the strings.

Despite three out of its five players playing strings and defining the soundscape, Oratorios and Songs is definitely not a string ensemble recording. Obviously aware of this, in his sleeve notes Emanem proprietor Martin Davidson writes of his love of this music before pondering whether there "will be enough broad-minded people around to appreciate this beautiful music as a whole." One element that may require such broad-minded people is Laura Tejeda Martin's mezzo-soprano which is versatile but sounds far more operatic than most jazz or improv voices. Her very precise diction, particularly when delivering lyrics based on poems, is sometimes reminiscent of Irène Aebi's voice in the groups of (Carter's erstwhile boss) Steve Lacy. As in those groups, some characteristics of the voice work well in context but a minority of listeners may need time to adjust; such adjustment is well worth making as when Martin's voice soars it is formidably powerful and affecting. To offset the voice, the inclusion of Bopp's trombone introduces an element that is recognisably from jazz and improv roots. When she gets the chance to shine, as on the extended "Cluster Ringing," Bopp steals the limelight, at times recalling Paul Rutherford. And when voice and trombone combine, they achieve an unexpected but impressive symbiosis.

Just as those additions have broadened the sound of the string trio, Carter's compositions here increase the range of his palette. Originally commissioned to accompany a multi-media show including dance (see the YouTube clip below for extracts from a performance), Oratorios and Songs blends a variety of elements including poetry, opera, jazz, improv and chamber music. The key word there is "blends" as Carter manages to integrate diverse ingredients into a whole that flows seamlessly without jump cuts or clunky gear changes. And, despite its original use to accompany live performances, the music stands up well in its own right. Throughout, the three string instruments underpin the music, whether playing as a trio or making individual contributions. Taken as a whole, this music gets better the more one hears it and it is well worth the investment of time to get to know it. It is impossible to argue with Davidson's description of it as "beautiful music." Highly recommended.

The Beginning; Cluster Ringing; Dumb Delights; The Red Haired man; Angela; Something for Conny; Manhattan Blues; Can’t Get Up; You Know..