Zermos: The Last Night of August 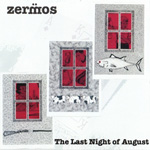 August 31, 2006: Taking the concept of the impromptu recording session to an illogical extreme, pianist David Minnick summons pals Gary Robertson (alto sax) and Ryan Enderle (bass) to an "undisclosed location," where they shut off the lights and proceed to improvise. Playing together for the very first time, Zermos struggles to find meaning in the darkness; instinct doesn't always lead them down convergent paths, but The Last Night of August is still an interesting and worthwhile journey to follow.

The disc lacks both the stuffed-shirt formality of much contemporary classical music and the stone-faced earnestness of free jazz. Minnick has not allowed his classical training to squelch his childlike capacity for getting weird sounds out of the piano; Enderle is a mindful bassist who solos lyrically, if all too seldom; and Robertson's sinuous, questing lines are occasional reminders that Zermos may actually have a distant relationship with bop and the blues.

Listeners unsure of how seriously Zermos takes itself need only to consult the packaging for clues, which include off-the-wall track titles ("He Xeroxed His Pet," "The Steering Wheel Seems Larger," et al.) and bizarre collage-style cover art. Minnick's previous release on Crabid Music, the label he started with brother Chris, was The Sursiks' I Didn't Know I Was Singing, one of the funniest and best releases of 2006. David Minnick understands that humor belongs in music, including free improv, and The Last Night of August works best if you're in on the joke.

If Eric Dolphy was out to lunch, then Zermos is taking a recess, chucking out the rules and predispositions that underscore even improvisation-based music. The Last Night of August is the sound of three performers rediscovering the simple pleasures of making it up as they go along.

Wax Paper; Phantom Limb; The Steering Wheel Seems Larger; This Tastes Bad; Who's Going to Sit Next to Me?; Office Party; Watering a Dead Plant; Brushing Your Teeth While Driving; He Xeroxed His Pet; Broken Vacuum.