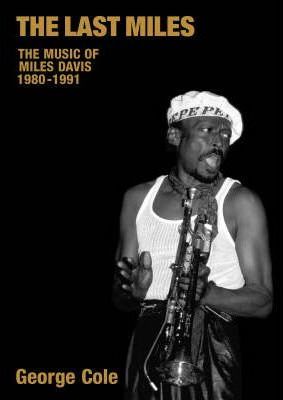 Always a controversial figure, the last decade of Miles Davis' life may, paradoxically, have been the most critically-contested of his career. Gone were the radical shifts of the man who had created such stylistically incongruous albums like Kind of Blue, Sketches of Spain, In a Silent Way and Bitches Brew. Instead, replacing the innovations that seemed to define his earlier years was an artist who appeared more concerned with finding a larger audience for his music; someone who was more a personality than a musical pathfinder.

It hasn't helped that, up until now, most writers have dismissed Miles' last decade as a time when he was essentially coasting. Some, like Jack Chambers, author of Milestones, have been downright derisive. Others, like Paul Tingen, whose well-researched and well-written Miles Beyond was the first to examine Miles' entire electric period, are more sympathetic; but coming from essentially a rock background, have found it easier to relate to the less pop-and funk-oriented electric excursions of his late-'60s and early-to-mid-'70s work.

And so, nearly 15 years after Miles' untimely death, a book has finally been published that pays detailed attention to Miles' last years. The Last Miles: The Music of Miles Davis, 1980-1991 examines, through an absolutely incredible series of interviews with virtually everyone who was involved with Miles during that period—and many who weren't—the reasons behind Miles' music in his last decade. Clearly the author, George Cole, is a sympathetic writer who has found much to admire in the period following Miles' re-emergence with '81's Man With the Horn.. But while it is clear that Cole is disposed towards Miles' work, he's not afraid to assess it in terms of success and, at times, failed but well-intentioned experiments.

Cole also doesn't skirt around the issue of Miles' health in his last decade, which contributed to certain inconsistencies. But while Miles may have emerged in '81 as a player in serious need of getting his chops back, the remarkable thing is just how strong Miles' playing would be for most of that decade. One anecdote, about how Miles would blow a strong and confident set, but as soon as he left the stage was literally caught by both arms by two men before he collapsed, paints a picture of an artist who was still committed to bringing it, night after night, tour after tour, despite his various health issues. And one thing is certain—like the period or not, it was in the '80s that people had the most chances to see Miles in performance most often, all over the world.

Cole organizes his book so that it can be read as a whole, or in a more episodic fashion. Dispensing with Miles' pre-'80s history in a scant 40 pages (including some interesting insights on Miles' "retirement period between '75 and '80), he quickly moves into chapters that are dedicated to each commercial album Miles released. The chapters follow a consistent format: a section devoted to the germination of each project, a section that provides a track-by-track breakdown, and a final verdict. What makes these chapters work are the extensive interviews— from the artists who worked on tracks that were ultimately discarded as much as from players who would eventually be represented on record. From the big players, like guitarists Mike Stern and John Scofield, to more transitional players like guitarist Hiram Bullock, who only played four concerts, Cole's narrative develops with a sense of truth, because it comes from a collage of interviews from so many artists, that it would be hard to bias the proceedings in any way.

Cole spends a lot of time on the work that ultimately resulted in Miles' first Warner Brothers album, Tutu, mainly because there were so many sessions ultimately rejected for various reasons—including the now legendary Rubberband sessions, that remain in the vaults unreleased to this day. And Miles' relationship with bassist Marcus Miller, who would play in Miles' first post-retirement band in the early '80s, move on, and then return to collaborate heavily on three of Miles' four Warner Brothers releases— Tutu, the soundtrack to Siesta, and Amandla, provides great insight into Miles the person. Miles' extremes were legendary, and Cole doesn't try to hedge the facts, but what emerges from the book is a kinder Miles than has, perhaps, been painted by some.

Cole then goes on to devote nearly 100 pages to Miles' many tours, and the posthumous live album, Live Around the World. As much as Miles' '80s albums had their appeal, Cole makes it clear that live, the material took on a whole other perspective. While some members of Miles' bands would leave because of the movement towards more restrictive form—and Miles' concerts would, in fact, begin to take on more of a rock concert vibe than anything else—the one thing that becomes evident is that, as prearranged as his concerts would appear to become, band members were still required to stay on their toes, as Miles would signal song and solo changes by sometimes the most innocuous of cues.

The format of the book has its advantages and disadvantages. Giving a track-by-track, blow-by-blow account of every song Miles recorded in the '80s means that it becomes increasingly difficult to find new and novel ways to say "funky. Perhaps Cole should have stuck with placing the songs in musical perspective, and avoided trying to describe each and every one as a unique piece of music.

The editing also leaves something to be desired. An extremely interesting and little-known fact is that keyboardist Lyle Mays, long-time member of the Pat Metheny Group, was actually considered as a potential collaborator for Tutu. What is annoying, however, is the constant misspelling of his name as "Mayes. Later in the book, Cole tries to describe the functioning of the whammy bar of a guitar, and is, quite simply, incorrect. Last, there are far too many instances of self-reference—"see below" being the worst offender. Referring to a future or past chapter is one thing; referring to something as vague as "below' in a 500-page book is more an exercise in futility.

These quibbles are, however, largely unimportant when one considers the scope of Cole's book and how incredibly thorough it is. There simply hasn't been another book published on Miles Davis, in any period, that has managed to obtain the wealth of interview material and cover his recorded work and various live tours in such a complete and comprehensive fashion.

While The Last Miles: The Music of Miles Davis, 1980-1991 may not convince the real purists out there that Miles' last years were anything more than simple commercial pandering, anyone who either appreciates the period, or has felt perhaps slightly ambiguous about it will likely be convinced that, while Miles wasn't forging new paths as he had previously, there was much more going on then met the eye.

Engagingly written from start to finish, and filled with more facts than most will be able to remember the first time through, The Last Miles is an essential portrait of Miles' last decade. It's also a strong argument that his music was both valid and perfectly in keeping with a musical philosophy that would ultimately stretch across six decades.