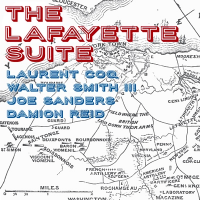 In The LaFayette Suite, two exceptional musicians—French pianist Laurent Coq and American saxophonist Walter Smith III—continue the spirit of collaboration which interestingly enough began around 1777 between French nobleman / military officer Marquis de Lafayette and President George Washington during the American Revolutionary War. In a suite funded by the Mid Atlantic Arts Foundation and the French American Jazz Exchange program, the project's historical inspiration brings to life the adventures of LaFayette, an aristocrat, decorated soldier, and ardent abolitionist whose accomplishments made a vast difference in reshaping countries and comraderies.

Coq has produced a number of exceptional releases including 2012's Rayuela (Sunnyside) co-led with alto saxophonist Miguel Zenon. The pianist's imaginative lyricism is the perfect foil blend with Smith's commanding and flowing tenor who is fast becoming one of today's profound saxophonists having performed with the likes of trumpeter Ambrose Akinmusire drummer Eric Harland. The two are augmented by the burning rhythm section of bassist Joe Sanders and drummer Damion Reid in a ten part suite fueled by its thought-provoking subject matter world class musicianship.

When listened to in its entirety the music's narrative unfolds in consecutive chapters written by Coq and Smith. A sublime piano and sax dialog in "Comte de Brogle"'s sets the mood resembling a classical sonata that emerges into a melodious structure. These chapters contain rapidly changing structures, sweeping movements and unexpected turns like the effervescent melody in "Charleston, South Carolina, June 13 1777" and the infectious swing in "The Battle of Brandywine" where Smith and Cog stoke the flames.

These are artists executing at the height of inventiveness—an emotive bowed bass line, fiery drum runs, and romantic themes. The quartet operates on an almost subliminal level executing the art of composition and improvisation. The music envisions the historical accounts in dramatic form—Lafayette's departure to America in "Pasajes de San Juan" or the sizzling harmony in "Valley Forge." The cool thing, though, is that it takes no knowledge of these 18th century events to enjoy this vibrant program 21st century music.

Jazz in particular is an art form of individualism but more so, partnership, as this outstanding recording illustrates.