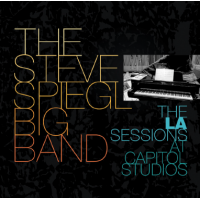 Almost every Monday morning for the past fifty years, composer-arranger Steve Spiegl convened his Los Angeles-based big band for a rehearsal session, assembling, for most of that time, at the Musicians Union in Hollywood and, more recently, at its new home in Burbank. When Spiegl decided in 2019 to pull up stakes and move northward to Oregon, which meant bidding a melancholy goodbye to the band and its weekly rehearsals, it marked the end of an era—but not without one last hurrah. Before his departure, Spiegl and the ensemble came together one more time to plan their fifth and final album under his tutelage, The L.A. Sessions at Capitol Studios, recorded in December 2019.

Spiegl, who has written and arranged for groups ranging from high schools to the Stan Kenton Orchestra, authored three of the album's nine selections and arranged all of them. To exemplify his love of classical music as well as jazz, he included inspiring themes by George Friedrich Handel, Richard Wagner, Giacomo Puccini and Giuseppe Verdi (his "Ave Maria," not the more well- known hymn by Franz Schubert) along with Jerome Kern's exquisite standard, "All the Things You Are." Spiegl's charts are typically picturesque and assertive— even the classical numbers leave no swing unturned—and it goes without saying that the band is impressively well-rehearsed. Who knew that "Ave Maria," Handel's "Penna Tiranna," Wagner's "Parsifal" and Puccini's "Tosca" and "Turnadot" could rock and roar so forcefully and often in a contemporary framework? Apparently, Spiegl did—and proves it time and again with charts that enhance their natural loveliness and charm while adding the singular harmonies, rhythms and fireworks that only modern jazz can provide.

Spiegl and the ensemble raise the curtain in superlative fashion with "All The Things You Are," wherein Spiegl uses a samba beat on the bridge to underline its allure, and embroiders the melody with a brief quote from "Some Day My Prince Will Come," from Walt Disney's 1938 animated film, Snow White and the Seven Dwarfs. Kern swings as never before, abetted by bracing solos from alto Kim Richmond and pianist Michael Asher. The Latin motif has the upper hand on Spiegl's lustrous "Gardens of Cordoba" (solos by guitarist Andy Waddell and trumpeter Ron Stout), which precedes the bright and expressive "Ave Maria," on which Waddell solos again, this time with tenor saxophonist Mike Nelson. Handel's "Penna Tiranna" enters quietly, primly escorted by Waddell and Asher, before brass and reeds set in motion a pleasing uptick in tempo escalated by tenor saxophonist Doug Webb and trombonist Charlie Morillas. Spiegl's ornate and vigorous "Benedetta Suite" is yet another tour de force for the ensemble, enriched by Stan Martin's burnished flugelhorn, Waddell's guitar and Ian Vo's soprano sax.

The rhythm section sits on its hands for the first two minutes of Wagner's "Parsifal," then commandeers center stage to spur a lively and radiant chart that belies the composer's notoriety for writing music that is often heavy-handed and dispassionate. "Parsifal" is anything but that, thrust doggedly forward as it is by the ensemble and Webb's muscular tenor. Perhaps no composer has written more memorable operatic scores than Puccini, a forte that is tastefully shared on "Tosca," whose marvelous melodies and rhythms are admirably reinforced by Stout, Waddell and Webb. Spiegl's colorful "Cartagena Night" is yet another winner, its irrepressible rhythms and tantalizing melody evoking images of Spain while allocating space for admirable solos by Richmond, Morillas, Asher and Waddell. While "Cartagena" would have been a respectable way to close the session, Spiegl chose instead to summon Puccini for an encore, renovating another of his glorious operatic scores, "Turandot." Following brief but effective solos by Webb, Asher, Richmond and Morillas, the curtain descends, as it should, with the ensemble at its full-throated zenith, rephrasing one of the more memorable songs ever written, for opera or anywhere else. "Nessun Dorma."

This is one of those rare sessions in which every element fits as snugly in place as a well-crafted jigsaw puzzle. The band and soloists are exemplary, but no more so than Spiegl's magisterial charts. It is, in fact, his deft arrangements and astute choice of material that lend the album the lion's share of its personality and charm. When all is said and done, Spiegl and his sidekicks have easily proven their claim to a well-earned five-star farewell, and so it shall be.