BY DAN BILAWSKY
November 19, 2020
Sign in to view read count 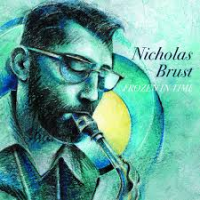 Want to hear somebody who means business? Just listen to Nicholas Brust deftly drive through Frozen In Time's opener, "Work Ahead." That initial offering on this, the alto saxophonist's full-length debut, explores the travails and triumphs of breaking into the jazz world in New York. Judging by the way Brust burns, flows and blows the doors wide open with his playing, it would seem that he is making significant inroads in that area.

An Eastman and New England Conservatory alumnus with considerable chops, a proclivity to probe, and notable creative bent and intent, Brust uses this program to put his best foot forward. Whether lacing modernistic explorations with poppy inclinations on "Hearts and Spades," building from a pensive stance to a position fueled by passion during "Brooklyn Folk Song," artfully skating across the odd-metered foundation(s) of the title track or tracing the arc of a squall on "Something Like a Storm," he finds a way to blend strong technique, structural savvy and pure spontaneity into a cohesive whole. Even in the most contemplative spaces, like the compendious and thoughtful "Hymnal for Those in Need" or cool-blooded "Soliloquy in F minor," Brust builds and maintains interest while developing his well-formed ideas to the fullest.

This leader's skills and solid intuition move beyond his writing and performing, as his personnel choices also reflect excellent taste. Sharing space with guitarist Ben Eunson, who merges fluidness and heat like few others, and engaging the services of a tight rhythm section including pianist Tuomo Uusitalo, bassist Josh Allen and drummer Jay Sawyer, the leader places himself in good light and great company. These five get along just swimmingly as they navigate the smart contours in Brust's writing. Despite its title phrase, and because of this strong chemistry, Frozen In Time lives completely in the moment.

Work Ahead; Hearts and Spades; Brooklyn Folk Song; Frozen in Time; Hymnal for Those in Need; Adversity; Something Like a Storm; Soliloquy in F Minor; A Shifting State.