By John Sharpe
August 10, 2022
Sign in to view read count
British saxophonist John Butcher has originated an astounding array of saxophone techniques which he combines in a personal syntax which is instantly recognizable, particularly involving the production of a broad range of multiphonics which vary from juddering growl to chirruping stridulation, but which defies easy description. Novel sounds in themselves of course would only be of passing interest were the way in which he orchestrates on-the-fly, either alone or in consort with others, not so compelling.

As a result he occupies a unique position in the reed pantheon. An improviser who emerged on the London scene in the early 1970s, he has since amassed a substantive body of work with an ever widening roster of partners, which has included American luminaries such as Matthew Shipp, Nate Wooley and Joe McPhee, as well as the cream of European talent.

While the one off meeting persists as a constant fixture in improvised music, many argue that it's the longer established outlets which allow the alchemy and inspiration to crystallize. As if accepting the truth of this proposition, this five-LP collection issued on the Ni Vu Ni Connu imprint celebrates Butcher in conjunction with several of his most potent collaborators. Four of the sets were recorded at the Berlin performance space Ausland over two nights in 2019, while the fifth is drawn from two sessions elsewhere that same year. Each comes with sleeve notes by Stuart Broomer, photographs by Cristina Marx and design by Yaqin Si.

In the liners, Butcher explains that he was interested in the potential distinctiveness of each set, but without making major aesthetic leaps. Nonetheless each album does present slightly different facets of his artistry, while remaining unmistakably Butcher. Each album is available separately either as a limited edition LP or as a download, but given the consistent high quality, it's likely that the whole series will prove essential for his many followers. 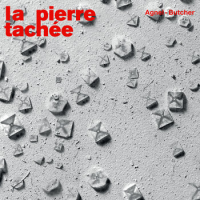 She and Butcher enjoy a special connection, manifest in both synchronicities such as Butcher's stutter in reaction to Agnel's hammered keys or stark juxtapositions like the sound of a swirling saxophone vortex pitched against abrasive scrapes on metal. Moods come and go, variously mysterious, meditative, anxious and intense, but always seemingly governed by a mutually agreed but unpredictable logic. Perhaps the pared back cast promotes the more direct interaction and permits greater focus on areas of common ground and intent without the derailments or digressions an additional voices might encourage.

Like the best of these discs, the interchange implies a real-time appreciation of shape and form. That's most obvious on "Sillonner," where reminiscent of the ABA model, the initial sparse soundscape of solitary soprano peeps and isolated keystrokes, both modified and not, reprises at the close, bookending a crescendo of hyperspeed churring saxophone and thickly coagulating piano lines. Across four cuts their pairings encompass both directly responsive gestures, like Butcher's staccato plosive cough rejoinders to Agnel's barely audible taps on "Shrieks In Cups Of Gold," as well as resolutely oppositional textures as when he soars in a circular breathed thermal in answer to the pianist's harsh scuffs across the strings. Theirs is a perfectly poised communion. 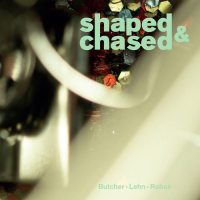 Quicksilver change characterizes the reunion of Butcher with some of his most longstanding partners American percussionist Gino Robair and German electronicist Thomas Lehn on Shaped And Chased. They share a culture of fast evolving alliances which bestow a restless energy upon the four tracks. Often one of the three drops out leaving the remaining pair to institute a direction, only for it to be fundamentally altered by his comeback and the subsequent stepping down of one of the initial twosome.

Contrasts abound as a consequence, whether between sequences of sharper accents and sustained drones, explosive skronk and subdued eerie passages or pointillist landscapes and madcap momentum. As with all these sets, the musical journey assumes far greater significance than the destination. And it's quite a ride. Robair is one of the most untypical of percussionists, with a love of resonance and unlikely means to draw long tones from his drum heads and cymbals, while Lehn, so often the wild card in other settings but here among peers, uses his analog synthesizer to both blend, thrillingly diverge or pursue other paths completely. Evidence of the fine degree of control at his fingertips comes during "Swough," when he instantaneously matches the pitch of Butcher's saxophone in a lovely almost-but-not-quite convergence.

Among the highlights are the saxophone/drum duet, which erupts from an oblique colloquy of rattles, mutters and clanks at the center of "Halouen." It wouldn't be too out of place in a free jazz blow, although the subsequent thickening of the grain by Lehn's unruly circuitry might raise an eyebrow. All three stop abruptly in full spate, as if a faucet has been shut off, graphic confirmation of the turn on a dime nature of the interplay. 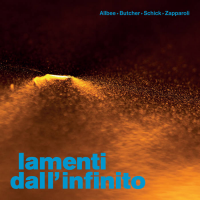 On Lamenti Dall'Infinito Butcher immerses himself in a group ethos which privileges pure sound and rarefied atmospherics. Such is the saxophonist's propensity for emulating electronic outputs that he often merges fairly homogenously with the turntables and electronics of Ignaz Schick and tapes of Marta Zapparoli. They create a canvas near continuously covered by a variety of hues, both saturated and transparent, which either bleed into one other or constitute overlapping layers, without any one color dominating. Such a carefully curated picture is only possible thanks to close listening and a selfless dedication to cooperative expression.

Making a virtue of discretion, everyone holds back in a web of taut complicity. Expat American trumpeter Liz Allbee rounds out the quartet and her grousing buzzing exchanges with Butcher furnish some of the jazziest moments of the entire collection, though of course that's a relative term. It's as if viewing Charlie Parker and Dizzy Gillespie through hall of mirrors, shorn of any context. One episode on the sidelong "Sea Of Distortions" introduces humor too, as the halting badinage of mewls between muted trumpet and saxophone evokes two discombobulated cartoon characters.

It's not until towards the end of the final "Molecular Memories" that Butcher steps into the spotlight, in a stirring display of non-stop spiraling soprano which both underlines his virtuosity and supplies an exclamation point to the extended discourse. 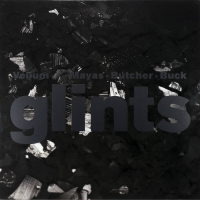 The trio of Butcher, German pianist Magda Mayas and Australian drummer Tony Buck (better known as one third of The Necks), which goes under the moniker Vellum, deploys individual lexicons to construct a language on the border between instrumental conversation and near abstraction on Glints. A sort of musical Esperanto if you will. Mayas fully explores the percussive and timbral capabilities of her instrument, like Butcher rarely playing an unmediated note. Buck balances out any repeated motifs from saxophone or piano by maintaining a non-recurring flow of rustles, clangs and clatters, though he distinguishes himself from the many working similar terrain through his use of his bass drum amid an articulate bottom end.

They always seem to know where they are going, and there are just enough fleeting correlations, echoes and replicated figures to hint at structure, without tipping into predictability. One section on Side A gives a flavor, as a percussive dialogue between Mayas and Buck reorientates with Butcher's arrival, his throaty chuckle briefly acknowledged with a drum roll from Buck, before the saxophonist replies to Mayas' sticky glissandos with a series of scalar phrases of his own.

And then the caravan moves on as it does throughout this enthralling trip. Even the pauses which periodically arise seem like they demarcate separate movements within the single 44-minute piece. While the discernment of form in such off the wall events lies possibly in the ear of the behearer, it's a feeling which returns on each subsequent spin, suggesting at least some underlying objective basis. 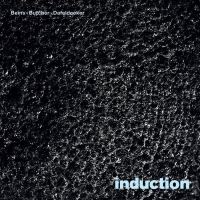 Butcher introduces a newer unit on Induction, comprising German percussionist Burkhard Beins and Austrian bassist Werner Dafeldecker, although all three have performed together as part of the collective Polwechsel in the past. While it's hard to imagine a saxophone trio further from the visceral drive of The Last Dream Of Morning, Butcher's venture with Mark Sanders and John Edwards, this one is equally classy. They operate in a sphere the aural equivalent of tai chi, moving with restraint and purpose. Silence often seems to be a fourth member of the ensemble, interspersed among gleaming monoliths of considered sound.

Beins exhibits similar levels of discipline and precision to Butcher, and most importantly invention as well. Although Dafeldecker extracts a litany of unconventional sonorities from his bass, he also often fixes on reiterated patterns which anchor the improvisations and provide just a whiff of a framework. At one stage in "Circulation," Butcher almost synchronizes his squawks with the bass, but stays just enough out of kilter to foster a delicious tension. That is followed by further passages where the ghost of the patterns can be sensed even though they no longer retain the same configuration. It's moments like these that elevate this set above the run of the mill improv outing. The piece finishes by confounding expectations, as one final silence begets an ominous mechanical lurching, against which Butcher's whirling soprano takes flight, distantly recalling a klezmer refrain, before Beins' tolls and chimes usher in the conclusion. Outstanding.

Among other notable sorties, the series of drifting climaxes in "Connection" is interrupted by an electrifying banshee wail from Butcher, which subsides as suddenly as it materialized, while the saxophonist conjures pops and sine waves which suggest electronics during the creaks and knocks of "Conversion." Although determinedly unflashy, this is nonetheless engrossing edge-of-seat stuff.