The Jazz Ear: Conversations Over Music

By Tom Greenland
March 7, 2009
Sign in to view read count 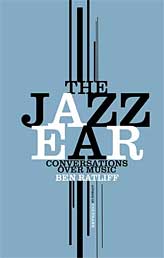 Ratliff's modus operandi was to conduct each interview while listening to recordings that his subjects had preselected, using the music as lubrication and inspiration, a set of "changes" to blow over. This would, hopefully, provoke spontaneous reactions instead of usual worked-out "licks" that many understandably self-promotional musicians are likely to regurgitate in the heat of media attention.

For the most part Ratliff is successful and the reader is treated to a variety of engrossing insights into each artist's aesthetic ethos: Metheny talks of the "glue" that makes musical ideas cohere; Schneider reveals underlying metaphors of flying in her compositions; Klein revels in the impact of "freshly discovered" harmonies; Haynes and Motian offer insightful critiques of their drumming peers; Brookmeyer advises "Keep your hand on the soloist"; Reeves pays homage to Shirley Horn by duplicating every nuance of her sung phrases; and Coleman expounds and expands on his concept of "unison". Some of the most interesting moments occur when Ratliff ventures an opinion of his own, only to stand 'corrected' with a clarifying riposte.

In spite of Ratliff's careful preparation, proprietary editorial hand and brusque, pithy prose, these interviews emerge finally as co-improvisations, freewheeling blowing sessions that, like many a classic Verve side, make up for in panache what they might lack in polish.