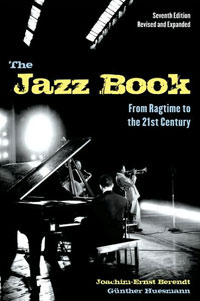 The first edition of The Jazz Book came out in 1952, the earnest work of European jazz scholar Joachim-Ernst Berendt. At the time, of course, saxophonist Charlie Parker and trumpeter Dizzy Gillespie were newcomers, trumpeter Miles Davis and saxophonist John Coltrane were hardly on the radar, and thankfully no one had to write about fusion. Since then Berendt picked up a collaborator in fellow European Gunter Huesmann, and the book has undergone several revisions while wandering in and out of print. In 2009 it finally arrived again in a hefty 816 page, seventh edition that carries the history up to the 21st century. The title and the size basically scream out that this is the only jazz book out there that matters.

And for the most part, it is. The authors have achieved a rare feat in creating a book that includes just about everyone who is or was a factor in the development of the music; rest assured that if you aren't mentioned in here, you weren't a major player. Of course there will be some gripes about some people who don't make an appearance (some may think that saxophonist Lennie Niehaus deserved a mention, for instance) but precious few people are neglected. And the presentation is about as unbiased an account as can be; it is hard to imagine anyone taking umbrage at the way certain musicians and styles are depicted. There is no overt criticism of any particular style and, while some artists and periods are definitely mentioned as being more important than others, all are weighed with equal objectivity.

Ingeniously, The Jazz Book is laid out in different sections, presenting the history of the music through different lenses. The authors start out by giving a brief overview of each decade and the representative styles that emerged. They then delve into the most significant players, starting with trumpeter Louis Armstrong and going all the way to saxophonist John Zorn. Then follows an overview of each instrument and the significant artists for each, followed by sections on singers and big bands over the years. This makes for a repetitive read from cover to cover, as certain artists will appear in each section and most of the material is the same.

However, Berendt and Huesmann never intended The Jazz Book to be read straight through; rather, they made each section complete on its own, to allow the reader to dip in wherever they saw fit. This is one of the strengths of the book: while there is a straightforward chronological narrative, there is also the opportunity to look at jazz through individual artists and their influence, as well as how different instruments came to be. In each section there is a kernel of information or some new insight that, no matter how much somone may have read about jazz, they'll likely find new.

Despite their overall success in handling such an unwieldy subject, there are a few problems that emerge when the authors approach jazz from the 1970s onwards (presumably Huesmann, who was largely responsible for the later editions, is the main problem here; if it was a problem with the translation, it would plague the whole book.) For one thing, the writing degenerates into stuffy academic prose; instead of the lively bounce found in the passages on the early heroes, we get dry lists of the different styles, analyzed to death. There is also a disproportionate amount of ink spent on these decades than the previous one, and oddly so; for instance fusion gets a lengthy breakdown, yet the authors admit that there were only a few albums from the movement worthwhile. So why bother spending all the time on it? Many people who write about jazz after the 1960s have a chip on their shoulder and feel they need to prove that the jazz that was created was just as good as what came before. Writing about it in a way that makes it all seem dull as dishwater won't get that accomplished.

However, it's easy enough for the reader to skip over the stuff which isn't of interest, and the authors are to be commended for taking such a global look at the music; has the European jazz scene ever received such inspection? Also, no matter how big a collection is, there's sure to be a record mentioned that will pique interest. Suitable for those who want to learn more about the music or those who just want to settle in to read about an artist that they know everything about, The Jazz Book will fit the bill. It's a readable, pitch-perfect labor of love that reminds us of all the great music that has been created over the years.