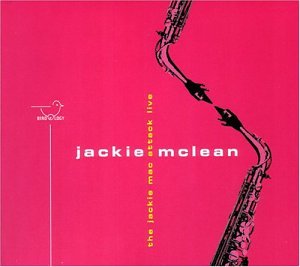 Last year, with no fanfare whatsoever, this outstanding recording was reissued by Birdology, the reissue arm of Dreyfus Records. It features one of the greatest alto saxophonists in jazz history, in a 1991 club performance, going for broke, and in the process, making an album for the ages.

McLean starts the proceedings off with a bang, spitting out the riff to "Cyclical," an up-tempo minor blues. He then proceeds to carve out a stunning, in- your-face improvisation, with all his faculties intact. There's his inimitable tone, slightly sharp, sounding like bittersweet molten lava. There's his miraculous intensity, as if he's playing for his life. There are his roiling swing, and the tidal wave of fresh ideas, the constant creativity. McLean never coasts.

"Minor March" is similarly ferocious, magnificent up-tempo hard bop with superb work by McLean, who never lets up. Even the more lyrical pieces, the Latin "Song For My Queen" and the standard "Round Midnight," are played with an impressive edginess.

The rhythm section should not be neglected. They function as a unit, meshing with admirable precision and burning, really burning. Galeta is a formidable soloist and a capable comper. He also wrote "Song For My Queen," with its arresting chord changes. Reeves is rock-solid, and Allen is a strong and powerful timekeeper who also solos impressively on "Minor March."

If you missed The Jackie Mac Attack Live the first time around, now's the time to correct that oversight.