Home » Jazz Articles » Neil Welch: The Ink Around It

Neil Welch: The Ink Around It 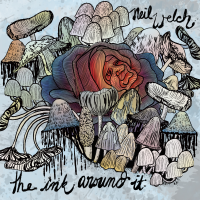 Music is ephemeral by nature. The conical airflow of a saxophone could be nothing more than "airy charm"—as the magician Prospero in The Tempest might have it—but this fails to substantiate its power. Though the rousing craft of Seattle composer and saxophonist Neil Welch does. In his acclaimed duo Bad Luck with drummer Christopher Icasiano, he's "plucked up / the pine and cedar" through a wildly generative approach to the tenor. Combining profound humility with a tectonic techique, Welch approaches the saxophone family as a transmaterial collaboration, an alloy of sound and soul. Blowing a storm through various groups throughout the Northwest scene, like the bard's wizard he has strived to reconcile art and nature, force and fate, earth sound and heavenly music.

His latest synthesis on record, The Ink Around It, calls out from a place "deeper than did ever plummet sound," taking its title from the poetry of poet Joan Naviyuk Kane, The album inscribes the planet's tenacious trace on the impermanent imprints of humankind; it takes its title from Kane's poem "Drawn Together," that says of a vision: "Last night's lopped moon / Couldn't put into words / The Ink Around it." This in the vein of drummer Max Roach's ambitious political suites of the early 1960s. Its second part, "Concepción Picciotto," engages saxophone section, rhythm section, string quartet, and vocalist (mezzo-soprano Danielle Reutter-Harrah). Composed over two years, the piece is informed by and dedicated to the eponymous homeless peace activist, who protested US military aggression before the White House from 1981-2016. "The melody came to me through improvising in the forest," Welch has said of the melodic core to the composition. "I hiked several times into the North Cascades with a horn. In my solitude I would reflect on the strong environment around me and why it is worth preserving." The resulting theme haunts the piece like the memory of Concepción herself, roaming in careful quarter tones through an unstable and shifting climate. (This tempestuous instrumental support includes cellist Ebony Miranda, and saxophonist Ivan Arteaga, among others).

Reutter-Harrah's eerie but soulful delivery, doubled at times, by violin and string orchestra, intercrosses the pianistic lines of Welch's voice on tenor. Accenting the piece with tidal flats of breath, the saxophonist also scorches in solo sections backed by Icasiano and bassist Abbey Blackwell. It is startling to hear Welch's instrumental approach, so chemical and unutterable, extended to full and novel orchestration. Elements of the natural world, such as the composer's transcriptions of northwest bird song, flurry behind a moaning and stretching string quartet. The group passages amass and dispel the terror of nuclear proliferation and a quiet awe before the lush forests of the Northwest. The activist's long struggle can be heard on moments of ethereal majesty —accented by Reutter-Harrah's novel use of a hand mute during solo sections—as well as improvisations and group song. An ascendant finale, textured like dry grass, assembles the ensemble for a transcendent epilogue.

Resembling Roscoe Mitchell's 1977 classic "Nonaah," the seventeen-minute opener "Pohpowee" documents Welch's ever-evolving examination of the solo saxophone. In the Potawatomi language this title refers to "the force which causes mushrooms to push up from the earth overnight," which Prospero would define as those forces "whose pastime / is to make midnight mushrumps." Through careful pacing, deliberate phrasing, and split tone multiphonics, the saxophonist stretches out mycelium threads, interweaves them into resonant nodules, lets buds of bitter harmonics bubble up. Beginning with a short, buzzing refrain, the piece breeds and bursts through a fungal sense of time, interrupted only by the ostinatos of beasts lumbering high overhead. A remarkable performance piece in its own right, "Pohpowee" illustratively combines an aesthetics of the natural with the artist's passion for sonic transformations. It's dewey ghost notes, astonishing flits of interval clusters, growling hints of the human voice, accomplish a multicellular musicality that opens up new acoustic images. A worthy complement to the prior piece, its exquisite detail instead conveys life neither animal nor plant. From the operatic, pan-human scale of Concepción Picciotto" to this close microscopy,

The Ink Around It eloquently conveys a declension of the human. Thus, aiming to give up the "rough magic" that has granted him supernatural power over the earth, even Prospero pauses before he breaks his staff, needing this kind of "heavenly music...to work [his] end upon their sense."

Title: The Ink Around It | Year Released: 2021 | Record Label: Self-Produced