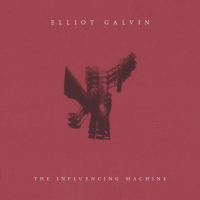 The Influencing Machine is a concept album based on the book of the same name by Mike Jay. This true account tells the story of James Tilley-Matthews, a tea merchant and double agent, architect and political thinker. Born in 1770, Tilley- Matthews was renowned not just for his various and varied professional activities, but more because he was a paranoid schizophrenic who believed he was controlled by a machine that he coined an air loom. Committed to Bethlem psychiatric hospital (aka Bedlam) in 1797, his was the first fully documented case of its kind.

Following his debut album Dreamland (2014) and its successor Punch (2016), Elliot Galvin is undoubtedly maturing into one of the UK's most imaginative keyboardist-composers. His compositions here are once again replete with the playfulness that so characterises his previous works. But this scherzo (as opposed to schizo) tendency adds depth and interest. As evidenced by the first half of "Bikini Island," Galvin's music bears a passing similarity to Frank Zappa's occasional forays into musique concrète," but nevertheless it still retains its own distinct pallete of tonal colour.

The opener, "New Model Army" is effectively a blueprint for the structure of many of the pieces often split into two (or more) parts, but here it's much more obvious, a sombre piano opening starkly juxtaposed with Eighties electro pop. A simple short repeated theme opens "Red and Yellow" interspersed with sampled sound effects and augmented by Tom McCredie's resonantly rich bass and shimmering piano flurries. Galvin's magisterial playing on the haunting "Society Of Universal Harmony" also benefits from Corrie Dick's subtle percussive embellishments. "Planet Ping Pong" sees McCredie swap his bass for electric guitar, playing here in a convincing high life style. "Monster Mind" is in turn raucous and ruminative and then, by way of a collective improvisation interlude, both.

On "Bees, Dogs And Flies" Galvin's piano wanders into baroque classical territory but he deploys a handbrake turn on the ensuing "Boys Club," notably with the shock of McCredie's overdriven electric guitar. The short "Fountainhead" closes the suite with echoey, ghostly piano imparting a sense of unease that might reflect the complex, troubled mind of the schizophrenic patient. Rather than resorting to tried and tested clichés, Galvin uses novel modes and techniques of expression to eloquently portray in music the split personality of his chosen subject. He is now a key player in the vanguard of contemporary British jazz musicians and this is his best album to date.