By C. MICHAEL BAILEY
August 16, 2013
Sign in to view read count
Drummer Tim Solook began his career on the West Coast, and later migrated East to Texas where he immediately became a "made man" in the Houston Jazz Mafia. A regular drummer for fellow Houston Jazz Mafia member Tianna Hall, Solook has two recordings as a leader in his musical quiver, 2005's Ability and 2013's Comfortable Blues. Both recordings are populated with original Solook compositions. 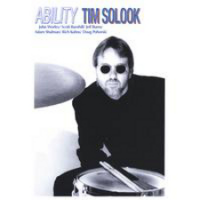 For his debut collection, recorded while he was living in California, drummer Tim Solook leads a fully powered septet that plays a potent brand of adult contemporary jazz that is fully satisfying. Solook accomplishes this by composing music that reaches from a well-behaved slash and burn organ jazz of Stanton Moore to something approximating this side of the Yellowjackets...meaning he never descends into jamming noise or somnambulant smooth jazz.

Solook is front and center on this recording, opening the disc with a fractured drum roll translating into a funk backbeat on "Homecoming." Pianist Adam Shulman lays out a tense rhythm over trumpeter John Worley is allowed ample solo space shared with tenor saxophonist Scott Barnhill, who shows a greater affinity for the late Michael Brecker than saxophonists before him.

When organist Rich Kuhns take the harmonic wheel, things get richly greasy, as on "Lisa's Touch" and the title cut, the latter sporting Doug Pohorski's burping electric bass. "Ability" melds the grease of an organ trio with the refined horn section of an adult contemporary band, producing a hybrid sound that is both hip and satisfying. But all is not completely orderly. The collection closer, "Baker's Blues" features guitarist Jeff Buenz's dirtiest guitar playing and Barnhill's most muscular tenor playing. Leader Solook is always in complete command from his kit, where he provides the thunder necessary to drive the machine. 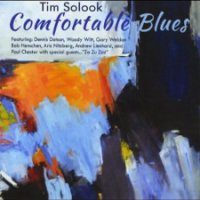 Breaking nearly ten years later, Tim Solook finds himself a "made man" in the Houston Jazz Mafia; operating in the thick of things. There are some usual suspects showing up in his band list, all Houston musical luminaries: pianist Bob Henschen, trumpeter Dennis Dotson, saxophonist Woody Witt and area-ubiquitous guitarist Paul Douglas Chester . Solook lights a fire with this band that smoulders and burns for 55-plus minutes over nine more original compositions by the drummer. Where Ability was well-crafted, Solook and company add the Texas hot sauce to the mix on Comfortable Blues, making apparent the musical growth of Solook since his debut recording.

Sollook opens this recording as he did his last, with a drum fanfare, introducing "Bobby Timmons," a piece that captures well the spirit of that Philadelphia-native pianist. Witt and Dotson combine to give Solook's septet a full-throated brass and reeds sections. The critical member of Solook's orchestra is guitarist Paul Douglas Chester who continues to be a welcome and integral part of the Houston musical community. His well-rounded tone and spare soloing approach make him immediately identifiable and always a durable musical element for incorporation into any subgenre he finds himself playing.

Solook's presence is at the center of both his collections, an inventive and forceful momentum, deftly guiding bands through his thoughtful and accessible compositions. His swing prowess is best heard on the vocal-oriented title cut, where he propels the music in waves that break perfectly against the groove...like the entire recording.