Nostalgia is the opiate of the Baby Boomer, reminding us, at once, of great and sustained artistry and the fleeting nature of that artistry. 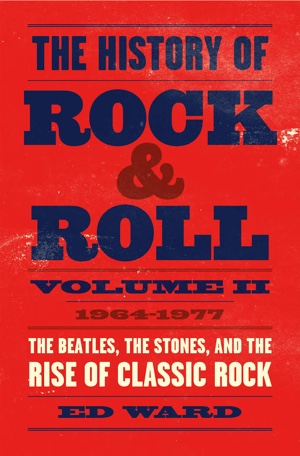 Ed Ward, Rock Historian on Terry Gross's NPR program Fresh Air (WHYY, Philadelphia), completes his survey of the history of rock music with The History of Rock & Roll, Volume 2: 1964—1977: The Beatles, the Stones, and the Rise of Classic Rock. In The History Of Rock & Roll, Volume 1: 1920-1965 (Flatiron Books, 2016), Ward starts his two-part tome against an historic information inertia, steadily accelerating to cruising speed at the start of Volume 2. The momentum accompanying Ward's summation of the "rock as popular music" era rightfully blows the reader's hair back. It is a heavy ride in a fast car.

The author begins with the Beatles first arriving in America, February 7, 1964 and ends, rightfully, on August 16, 1977 with the death of Elvis Presley. In between, Ward turns on warp drive and packs so much information into the intervening 300 pages that critical mass is almost met. Reading this history may leave one breathless: that feeling you have when you tell a lengthy story in one exhalation, finishing with no wind at all. This is not a criticism, only the truth, and you, gentle reader, need to be ready. Ward has a lot of ground to cover, and under the circumstances, discharges his responsibility well. But you will have to keep up.

Necessarily, Ward progresses chronologically, using music release dates as his overall guide, peppering that method with band foundings and breakups, notable concerts and festivals, and deaths of music industry royalty. The Beatles and the Rolling Stones loom large in this history and, thus, make two prominent arcs of thought in the book. The Band is wrought large, their The Last Waltz cast as a musical coda to the period. Other arcs include the intersections of Southern, Detroit, and Philadelphia Soul music featuring those cities plus Memphis, TN, Muscle Shoals, AL, and NOLA, plus the California components. The themes are obvious and the associated tendrils many. Ward surprises with mention of songs long forgotten or effectively buried in our collective unconscious minds.

There is a certain thrill riding this survey through a period of time lived now long ago. Nostalgia is the opiate of the Baby Boomer, reminding us, at once, of great and sustained artistry and the fleeting nature of that artistry. Ward closes his book with the inimitable Lester Bangs musing on the death of Elvis while predicting the future of rock music:

"If love truly is going out of fashion forever, which I do not believe, then along with our nurtured indifference to each other will be an even more contemptuous indifference to each others' objects of reverence. I thought it was Iggy Stooge, you thought it was Joni Mitchell or whoever else seemed to speak for your own private, entirely circumscribed situation's many pains and few ecstasies.

We will continue to fragment in this manner, because solipsism holds all the cards at present; it is a king whose domain engulfs even Elvis's. But I can guarantee you one thing: we will never again agree on anything as we agreed on Elvis. So I won't bother saying good-bye to his corpse. I will say good-bye to you."