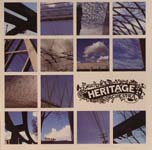 The Heritage Orchestra is a 45-piece symphony orchestra with an average age of 25, featuring jazz soloists and rhythm section, mixing classical orchestration with Hollywood and TV soundscape stylings and a splash of nu-soul. It's an exuberant and invigorating romp.

The band was put together eighteen months ago for a series of club nights at London's Cargo, and it was such a sensation that it looks like it's sticking around for a while yet. It's the brainchild of Chris Wheeler (producer and orchestra manager) and Jules Buckley (composer, orchestrator and conductor), who met while studying at the Guildhall School of Music. The prime mover was Wheeler, who quit the college early, bored and disaffected, after being accused by panel of professors of ignoring his "heritage." He determined to put an orchestra together that would represent his own postmodern heritage, and that of the participating musicians.

The result is a blast of good fun. As the strings swell, the horns get staccato and the drum beats grow more urgent, you can visualise two inner city 'tecs, ducking and weaving towards the perps, calling out "Cover me!" as they go. There are mellower times too, once the case is closed.

If it sounds slight, it isn't. It's musicianly and it's got depth. Prokofiev and Stravinsky make themselves heard. And the soloists are strong—Chris Bowden (alto saxophone), Trevor Mires (trombone), Matt Calvert (guitar) and Ross Stanley (Fender Rhodes), in particular, are memorable.

The Heritage Orchestra is on a mission to "revitalise the old, represent the new, and capture the future." And these players are having some serious fun while they go about it.

About The Heritage Orchestra